I made one more stop at the merch tables during the America's Hardcore fest...this time for Wild Side. They were probably one of the bands that I was most excited to see live on this stacked line up, and they did not disappoint. They had great energy, and their guitarist with long hair, tight blue jeans and Van Halen shirt absolutely shredded on the guitar solos. Band was a blast to catch live. 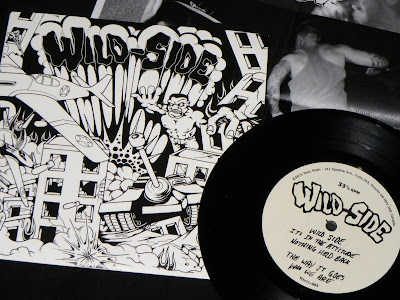 Spoiler alert, but their album is probably going to take the number one spot as my favorite hardcore record this year. I even told the singer as much when I spotted him as I was leaving the show, and with the cocky confidence you should expect from Wild Side, he told me it was actually the best album of all time. However, when it came to the first Wild Side 7 inch, I wasn't familiar with it at all...and truth be told, I wasn't really expecting much from this record. I don't know why, but I felt that these songs were going to fall well short of the band's album, and I couldn't have been more wrong. This 7 inch is great and easily measures up to the full length. With that intro to the Wild Side song, it makes me think of Mental alongside that Iron Boots/Warzone sound. 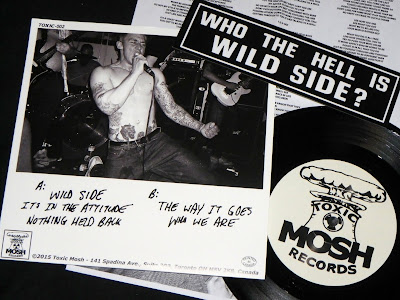 Since this 7 inch was only pressed on black vinyl, and there were no other pressings for this, I was happy to pick up a copy from the Wild Side merch table after the show...and grabbed a 'Who The Hell Is Wild Side?' sticker as well!

Actually there is a grey vinyl version, too. Plus there seems to be a release show cover.

Oh cool! I could have sworn that Discogs only showed the black vinyl pressing when I originally checked. Thanks for the info!

Definitely more than just black, I have this 7" on like a mint green colour.