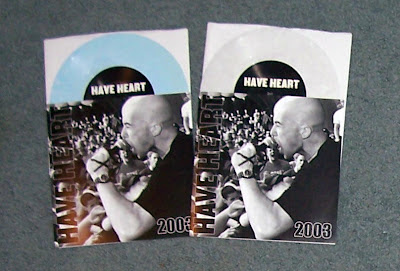 Bottled Up Records released a new pressing of the Have Heart 2003 Demo, so of course I had to have them. New covers this time around, and I got both the blue and grey colored vinyl. Since Bottled Up doesn't seem to have pressing info posted anywhere online, I have no idea how many of each were pressed. The front cover photo was taken at the posi-numbers show that Rob and I had gone to...however Have Heart played on the last day, and by that time we were already on the road back home.
Posted by Mike at 7:13 PM No comments: 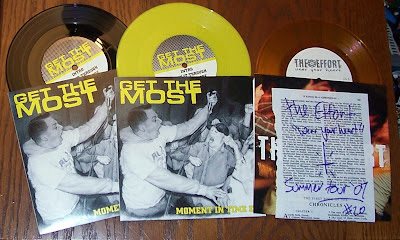 A month or so ago, Rob and I decided to go and see Overkill in New Hampshire. A few days after we made plans I found out that there was going to be an Edge Day show on the very same day. I was torn. I had really been looking forward to seeing Overkill with Rob, but come on, EDGE DAY...how could I miss that show?!?! The problem was that I had no idea who the bands were for the Edge Day line up. Remembering the disappointment of the last show I went to, and all the bad bands that I sat through, I decided to stick with our original plan and go see Overkill. Well shortly after Rob buys us tickets, I find out the Edge Day line up consists of Have Heart, Verse, The First Step, but most importantly, a kind of Ten Yard Fight reunion. Holy shit, I couldn't believe it...Wrench and Clevo were going to play Ten Yard Fight songs with a couple of other guys. I saw this band from their beginnings, straight through to their last show. I couldn't believe that I was going to have to miss seeing them. Big disappointment. Rob was awesome about it and offered to skip Overkill, so I could make the Edge Day show. No, I had committed to Overkill, and I couldn't back out of that just because something better came along. Well, after checking the map and show times, Rob figured that we could catch the beginning of Edge Day, skip out and then take the half hour drive over to Overkill. Yes, we were going to pull off a double header and go to both shows. 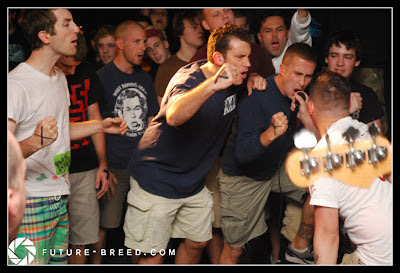 The Edge Day show was at Welfare Records in Haverhill, Mass. Before the show we checked out the store, and I could have very easily dropped $100 on vinyl. They had a huge Punk section, and a nice looking Metal section as well. I resisted the urge to spend money so I could see what the Edge Day merch tables had to offer first. We head down to show and find out that a National Geographic film crew is at the show shooting for some Inside Straight Edge show they are doing. Apparently they are there in connection with Ross Haenfler, the author of Straight Edge: Clean-Living Youth, Hardcore Punk, And Social Change. Rob and I joked that the film crew was wishing they were back in Africa running from lions instead of following around 16 year old kids, taping their conversations. We get inside and bump into Aram, he recognizes me right off and says that he knew that I would be at this show. We talk about how I'm going to have to leave early and miss The First Step, but he understands and says "You can see The First Step anytime, when will you get another chance to see Overkill.". He also mentions that he will be releasing the Get The Most demo on vinyl in a few weeks and he will make sure that I get a copy. Great to see him again, and I am immediately happy that we stopped in at the show. Get The Most play first and since this is probably the only band I will see for the day that I am familiar with, I head right down front. The band opened with Flame Still Burns by Youth of Today and I immediately take off across the stage for a nice dive. Their set was so much fun, ending with a cover of Chain of Strength's Never Understand and then Clock Me Out from their Common Goals E.P.. After their set, I headed up to pick up their new 7 inch, which they had on black and the limited yellow vinyl. Next up were Maintain and then Outrage. Both of which failed to impress me...wasn't feeling it at all. I was worried that we would only see crap bands until we left but thankfully Let Down and Foundation were both solid bands that I enjoyed checking out. Minutes before The Effort took the stage I bumped into Sweet Pete, and he was telling me that the band wanted him to sing an In My Eyes song with them. I wasn't sure if it was going to happen or not, but I made sure I was down front when the band started. I had seen The Effort at the last show I was at. At that time they had said that they were celebrating their six month anniversary and had record release pressings of their new 7 inch for sale. I was so put off that they had only been around for six months and already were releasing a record, that I didn't buy it out of principle. Well they surprised me this time around as their set was full of energy and did not disappoint. Half way through their set, they asked for a moment of silence for Ten Yard Fight and In My Eyes. After a few seconds of complete silence, Pete steps on the stage and they rip into Take The Risk. I push my way to the front of the stage, so overcome with adrenaline that when someone dives and lands on my neck, dropping me to my knees, I do not hesitate and I'm back up, scrambling onto the stage screaming along to the song. In My Eyes were one of my favorite bands, and I fucking lost it during this song, screaming my throat raw. Amazing. After The Effort finish their set, I head up to their table and pick up their 7 inch, which has a special Summer tour cover. The cover was a page ripped out of a bible, and hand written for their Summer tour...mine was numbered 20 and had a nice upside down cross on it. The record itself is really good, with Sean from Verse and Pat from Have Heart each doing guest vocals on a couple of songs. 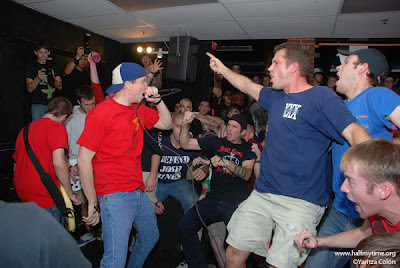 It's time for Rob and I to hit the road for the half hour drive to Overkill. Turns out we got there way too early and had to sit through too many bad metal bands. The only one that was semi-interesting was Candy Stripper Death Orgy. The funny thing was that Paul and had seen that band 15 years ago in Boston. I guess they are still going at it. The good thing about the show was that they had TV's playing the baseball game, and Rob and I watched the Sox take another step closer to the World Series, beating the Indians. Overkill finally went on around 11:00, and played an impressive set. They didn't play as many of the classics as I would have hoped, but it was still a good time. The show got out around 1:00 and I didn't make it to bed until 3:30 in the morning. One of the best days out at a show that I've had in a long time, even though I missed out on seeing my favorite bands. Good times.
Posted by Mike at 9:42 PM 3 comments: 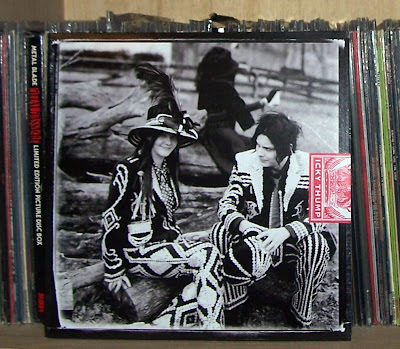 I am in love with the new White Stripes album, Icky Thump. The title track had it's hooks in me from the first time that I heard it, and after a few spins I appreciated the entire album more and more. The vinyl pressing of the album has the legendary Steve Hoffman doing the mastering. As opposed to most remastered CD that are released nowadays, where the engineer has a mindset of "louder is better", Hoffman seeks to breath new life into the music and give it the best possible sound. The remastered CD's that he did for Metallica's Ride the Lightning and Master of Puppets can go for over $100 on ebay. The only other piece of work of Hoffman's that I own is a remastered CD of Deep Purple's Who Do We Think We Are. But back to The White Stripes...I was eager to hear the new album with Hoffman's touch (he did not master the CD version of the album). I was planning a trip to Jeff's house one weekend, and decided that listening to the vinyl on his system would be the best case scenario, so I picked it up before heading over. This thing sounds so crisp...when Meg clicks her drums sticks together in one of the songs, it sounds like she is right in the room. Great sound. A cool thing about the vinyl is that there are different recordings of some of the songs, most notably Rag and Bone, which is completely missing Meg's vocal part. A great album, pressed on some nice thick vinyl with heavy gatefold packaging. A vinyl collector's wet dream.
Posted by Mike at 11:30 AM No comments: 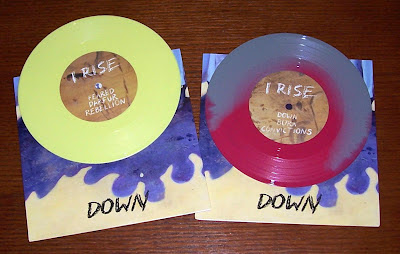 This has been the most anticipated record of 2007 for me so far. I loved the I Rise songs on the split 7 inch with Soul Control, and was really looking forward hearing more from this band. This 7 inch does not disappoint. Full of intense and driving hardcore, comparisons have been made to Burn, but I am really hearing an influence of Strife on some of these songs, especially Rebellion. I'm pretty sure that I ordered this record as soon as the pre-order info was posted on 1917 Records website, but somehow I didn't end up with the more limited pressing. Strange because I saw kids posting pictures of this record months ago on the Bridge Nine messageboard, and yet I just got mine. Either the people that do the 1917 mailorder are complete fuck-ups, or maybe they really did sell out of the burgundy (limited to 100) vinyl before I placed my order. I'll never know. The yellow vinyl was limited to 200, and the red/grey vinyl is limited to 715. I also ordered the Snake Eyes demo CD and the first Guns Up! CD as well. Both of them are really good.
Posted by Mike at 9:47 PM 2 comments: