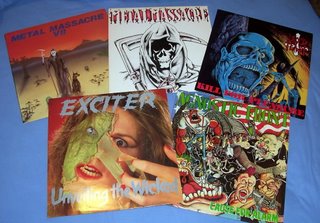 Right now I have a large stack of albums sitting here next to the computer. I was away on vacation last week and unable to listen to any music, let alone keep the blog updated. Now that I'm back I'm working through the stack and trying to get things caught up.
The day before I left for vacation, I went to Boston for a Red Sox game with Paul, Rob and Heidi. I was looking forward to hanging out in Fenway Park on a beautiful August afternoon, but I was more excited about stopping at Nuggets Records before the game. The last time I went shopping there I got all kinds of great rock albums, and I was looking forward to thumbing my way through the stacks of vinyl in search of more great finds. 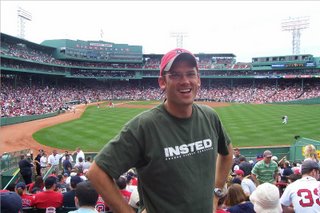 After lunch and record shopping, the four of us headed into Fenway park to watch the Red Sox take on the Yankees. We got inside too late to see Joey McIntyre sing the National Anthem, but we were excited for this great rivalry. Johnny Damon had gone to the dark side, signing with the Yankees, and the crowd rained boos upon him to show their disapproval. Unfortunately, Damon set the tone for the game hitting a triple to start the game. Boston showed off how bad of shape the pitching staff is in losing the game 12 to 4. It felt like the longest game in history, as the Red Sox pitcher was walking players while the bases were loaded. Even though there were some bright spots for Boston, with Hinske hitting three Doubles, it was still a rough game to sit through, getting to the point of hysterical that Boston could not throw a strike.

Great day and I'm looking forward to heading to Toronto with Rob and Paul at the end of September to watch the Sox play the Blue Jays. Of course the trip will include some record shopping! 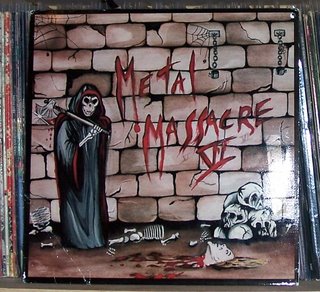 As a metalhead growing up in the 80's, if you weren't into Metal Blade Records, you weren't shit. This label introduced the world to Metallica and Slayer. Anything they put out could not lose. Metal Blade had a compilation series called Metal Massacre, which showcased a ton of great thrash and speed metal. I always wanted to own the Metal Massacre records growing up, but never got around to picking any of them up. I found Metal Massacre 6 on eBay for $3.25 and since I seem to be on a Heavy Metal kick, I couldn't let it pass me by. I didn't realize it when I bid on it, but it has a hole punched in the upper corner of the record sleeve. I hate cutouts, and would have passed on it had I known, but for $3.25, it's no big deal. The album art work is classic 80's speed metal...bloody heads and skulls. This record has great tracks by Possessed, Hallow's Eve, Hirax, Nasty Savage, Dark Angel and quite a few others. Death to posers.
Posted by Mike at 8:05 PM No comments:

From Another Breath and Verse 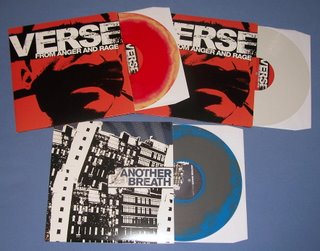 Here are the latest Rivalry Records pre-orders. First is the new Verse record, 'From Anger and Rage'. The new record is great, at times I feel like a cover of Inside Out's 'No Spiritual Surrender' would fit in nicely with their live set...they have that kind of sound. I got both colors of this record...the red and yellow swirl is limited to 270, while the white pressing is limited to 670. The other pre-order I got was the new Another Breath record, 'Mill City'. I had never heard this band before, but Rivalry posted a couple of new mp3's so I checked 'em out. I was really impressed. They play a hardcore style similar to Go It Alone. The blue and grey swirl colored vinyl is limited to 240.
Posted by Mike at 8:00 AM 1 comment:

Straight From The Bronx 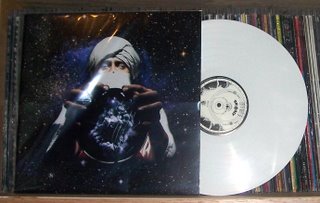 This entry is for the new Bronx LP on white vinyl. A couple of years ago I went to a show at The Palladium in Worcester. It was a huge punk/hardcore show with Circle Jerks and G.B.H. headlining. The Bronx was one of the opening bands. I had never heard of them, but I headed down to the stage to check them out. I was blown away by this band. Nobody in the club seemed to be into them, but they had this early L.A. punk sound and I was loving it. The singer was a total spaz on the stage, trying to get the crowd to do this "cobra dance" which everyone was too cool for. The band didn't seem to give a shit if the audience was into them or not, and they just gave off this total punk vibe. I bought their Bats EP at the show, and soon after saw their first CD at a local record store. That first CD completely captured the sound and attitude from their live show, and was one of my favorites from 2004. I downloaded the new album a month ago, and was really disappointed. The new songs were missing that snotty, kick ass sound. I loaded them into my MP3 player and would listen to their songs while I was at the gym. Slowly they started to grow on me, and soon I was loving it. Sure it isn't nearly as good as the first CD, but this new stuff is still some quality punk rock.
Posted by Mike at 10:07 PM No comments:

More Have Heart From B9 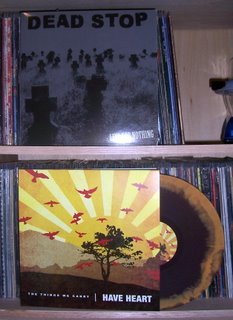 The current trend right now for hardcore records, seems to be gatefold sleeves. The two records that I got from the Bridge Nine mailorder both had that style of packaging. I love the gatefold sleeve. Something about it seems so special. The two records that I got were Have Heart and Dead Stop. I needed the brown/orange pressing of Have Heart's 'The Things We Carry'. It is limited to 700, and since they sent me two of the yellow/blue pressing the first time around, I still needed this color. The colored vinyl looks amazing, and coordinates with the album cover nicely. I also picked up the Dead Stop 'Live For Nothing' album. This is the US pressing on Havoc Records. I had heard all kinds of good things about this band, but had never checked them out. Saw Live For Nothing available in the B9 store, with the gatefold cover, and I figured to give it a shot. Dead Stop play a great style of hardcore thrash, and I would definitely recommend checking them out.
Posted by Mike at 7:38 PM No comments:

Happy Birthday To Me 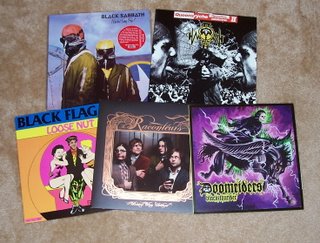 Today I turned 36 years old. Birthday's don't mean much to me. I enjoy life, and have a great time on this ride, so I don't really concentrate the number of years that have passed. As a friend of mine has been known to say..."You can't change what is.".
My family had a birthday party for me the other weekend. The only thing I ever really ask for is more music, and that was what I got this year. I did pretty good this year, getting a couple of DVD's, one of Dio and one of Judas Priest, plus I got some CD's which included Triple Threat and Mental. Of course this blog entry is about the vinyl that I got.
Posted by Mike at 9:34 PM No comments: 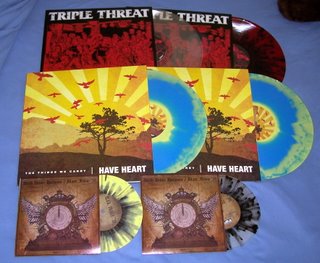 Bridge Nine comes on strong for this one releasing new albums by Have Heart and Triple Threat, plus a split 7 inch for Death Before Dishonor / Black Friday '29. Purchasing the vinyl package deal for $45 was rough on the bank account, but it was so worth it. Two pressings each of all three records was too tempting of a deal. Bridge Nine mailorder messed up and sent me two copies of the limited pressing of Have Heart. I was thinking of holding on to it and selling it on eBay in a year or so, but Rob was interested in it so I sold it to him for $10 to put towards the color pressing that I didn't receive.
Posted by Mike at 9:17 PM 1 comment: