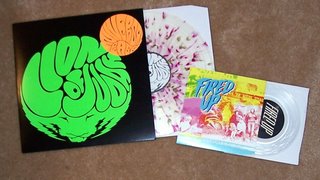 I finally got the latest Youngblood pre-order in the mail the other day. I believe that the label had some problems with the Fired Up CD, because they finally just shipped my package and will be sending the CD when it comes in. In addition to the new Fired Up 7 inch (limited to 200 on clear vinyl), I also got the new Lion of Judah LP (limited to 225 on clear vinyl with purple/gold splatter). The LOJ vinyl looks absolutely sick. Both records are really good, but I am liking the Fired Up 7 inch more. It has that youth crew hardore sound that I love, and the energy is just amazing. I saw the band play with The First Step last Spring, and I have been anticipating this release since that show.
Posted by Mike at 7:21 PM 1 comment: 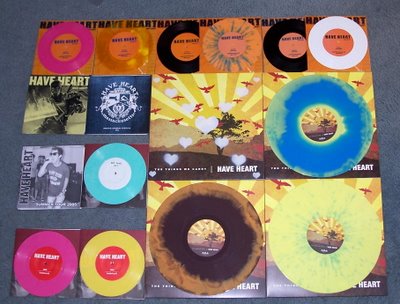 Back when I had a day off to myself, I pulled out the Have Heart collection. I received a new pressing of The Things We Carry from Bridge Nine Records, and figured that it was a good time to get a picture. The latest pressing is yellow with green splatter. It was the final gatefold pressing, limited to 1,000. My Have Heart collection has a little ways to go before it is complete, and I'm not really concentrating on it like I was 6 months ago. Still, I aim to get this complete at some point.
Posted by Mike at 4:33 PM 5 comments: 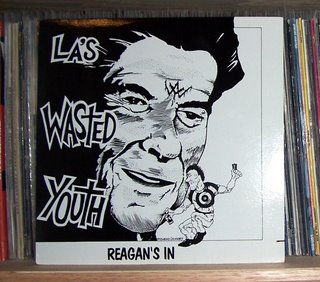 I took another day off from work this week. My friend, Jeff, had told me that the Radio Shack in town had a section for used vinyl in their store, so I figured that I would take a drive up the street to check it out. Truth be told, most of it was junk, but I did find a couple of records for the collection. 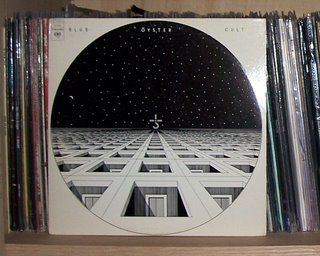 While I was pulling out my Champion records last week, I also decided to pull out my First Step collection. It isn't nearly as big as the Champion records, but I did just receive two new First Step pressings of What We Know, so I figured that I'd just get a picture of the whole collection. For some reason, at this point, I'm not really interested in collecting the 7 inches, so here is my collection of their 12 inch records. I just picked up the Sound and Fury Fest pressing of What We Know. It is on red with white splatter colored vinyl and is limited to 135. The guy from Rivalry Records was selling one on eBay, so I placed a bid. I was outbid, but the guy sent me an email saying that he had a couple of extra copies, so if I wanted one at the price of my maximum bid, I could have one. I checked with him and he also had an extra copy of the European pressing on grey, so I took him up on the offer and bought both copies.
Posted by Mike at 4:18 PM 2 comments:

Too Much Time On My Hands 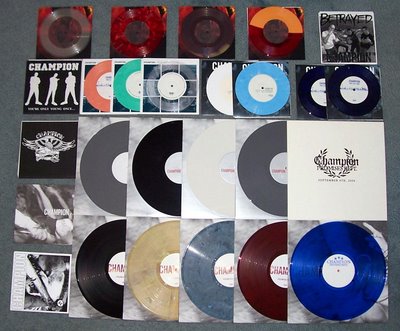 I had the day off from work today...just me...the wife was at work and the kids were at school. Perfect time to pull the records out of the closet, and take an updated picture of my Champion collection. Since I had picked up the last Promises Kept pressing that I needed, I felt it was a good time. The Champion collection still has quite a few holes, most notably is the pressing of Count Our Numbers with the Youth of Today cover. It was fun pulling all of these out today, and examining each pressing. I forgot that I had two pressings of Count Our Numbers on blue. Bridge Nine put up a blue pressing for sale, and then a month later they put up a "purple" pressing. I bought both of them, and they look identical. I've seen Aram selling both the blue and purple on ebay, and he has stated that the blue vinyl was a pressing plant error and is the more limited of the two...damned if I can tell them apart.
Posted by Mike at 10:27 PM 3 comments: