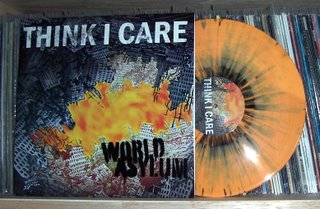 Think I Care pre-order from Bridge 9 Records. Orange with black splatter, limited to 300. World Asylum is the newest from this band. I picked up their self-titled CD a few years ago. Pretty decent hardcore with a definite Infest influence. I liked it, but I've probably listened to that CD about 5 times since I bought it. Didn't really hold my attention, even though I love Infest. Saw them at Posi-Numbers last year. Still failed to move me. The only reason why I bought their newest album was because it was on Bridge 9. I've only listened to World Asylum one time so it probably isn't fair for me to form an opinion yet, but it sounds like more of the same. There were a couple of songs that caught my attention but this may be a case of the record looking better than it sounds. 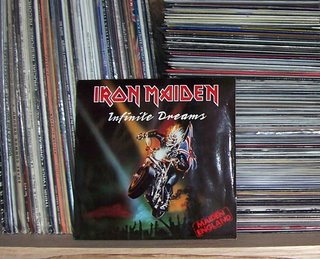 Iron Maiden 'Infinite Dreams'. This was released back in 1989 to promote the Maiden England VHS video. I've never seen the video, but I just got the single for my Maiden collection. Pretty cool record that comes with a Maiden patch...perfect for sewing on to your denim jacket in the 80's. Crucial for any self-respecting metalhead. The b-side on this record is a live version of Killers with Bruce singing. Worth it for that rarity alone. Working on my Iron Maiden vinyl collection is pretty casual...only buying when I am so moved and the price is right. Picked up this record on eBay for $7.00.

I Want To Be Rewritten 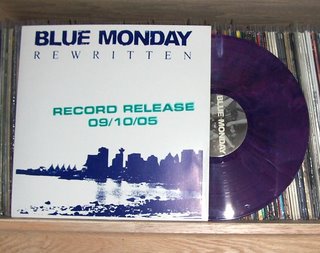 This record looked so good that it deserved two pictures. This was another eBay purchase made to comfort the sting of missing out on a different auction. The initial record that I was waiting to snipe was the Rivalry Showcase pressing of Blue Monday's Rewritten album. I forgot to bid and it ended selling for $11.00. Damn, this is happening more and more lately. Someone else gets a great price because I forget to bid. I had the need to spend and found this version of the same album...the record release cover. I was hoping to pull a low price, similar to the one that I had missed out on. It ended up selling for $31, which I would still consider a very good price since it is limited to 50 copies. When it arrived in the mail, I was amazed at how cool this record looks. Silk screened cover...both front and back. Hand numbered out of 50, and this one is number 2.
When I first heard this record, I thought that is was pretty good, but nothing great. And while I won't love it as much as Champion, this record has recently started to really grow on me. That part of the song The Everything Fest, where he just screams out "I Want To Be Rewritten", it is so powerful...so passionate. Damn, that line alone gets stuck in my head for days. 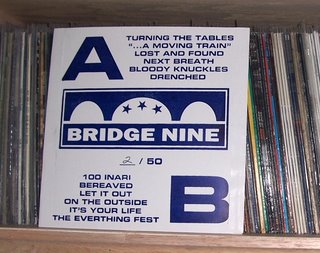 This Is Your Wake Up Call 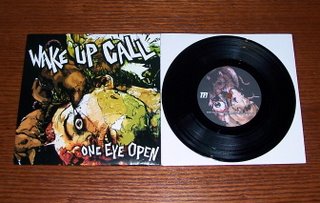 Hardcore from the state of Maine. With the recent exception of Outbreak, I have never had any love for hardcore bands from my home state. Maine kids in the past have had this love affair with band like Tree and Sam Black Church, plus bands like Madball and Hatebreed, that are rolled into that tough guy image. Not really my cup of tea. I was hesitant to pick up this new record from Wake Up Call, but I saw it at Newbury Comics while I was picking up the new Sick Of It All CD, and took the chance. I was surprised at how good it was. Straight up rippin' hardcore. It kind of reminds me of Outbreak, but that could just be because of the Maine connection. Anyway, this is great stuff. 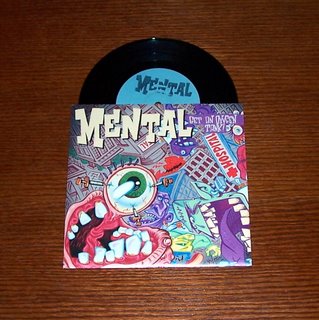 This is the second time that I've won this record on eBay. The first time I won it for $40 and never received it. It was the first time I got burned through eBay. After I hadn't seen the record in a month, I emailed the seller and got a reply from some girl apologizing and that they would be sending it right out. After a while I still hadn't received it so I emailed again and some guy replied saying that he had let his girlfriend take care of sending the stuff while he was out of town and she had messed it all up. He said that he would get it taken care of. Never saw that record.

Fast forward 8 months, and I saw the record up on eBay again. It was going for pretty cheap and I was planning on placing a last minute bid. My computer froze up and I missed out on the bidding. I was pissed that it sold at only $12 because I would have paid more than that.

Skip ahead a month and I see that this record is up on eBay again, and as the time was running out the bids were still pretty low so I thew in a maximum bid. To my surprise I won it for $14. The record doesn't seem to have the high price tag that it had when I originally bid on it, but I still feel like I got a good deal this time around.

So here it is, Mental 'Get An Oxygen Tank' Posi Numbers pressing. The cover is a little different from the regular pressing and the labels on the vinyl are hand stamped. This one is numbered 181 out of 250 pressed.
Posted by Mike at 6:37 AM No comments: 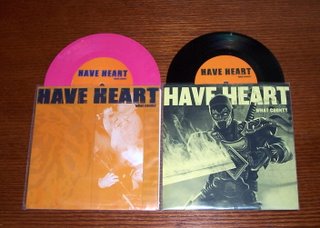 Add another band to list of records that I want to collect. After seeing these guys for the first time a few weeks ago, and then sitting down and reading the lyrics, I knew that I needed to start the Have Heart collection. There are so many pressings of the What Counts 7 inch and the Demo 7 inch, with all the different colors and tour covers, it looks like an exciting challenge. I found some guy getting rid of a ton of Have Heart records on eBay, and with a few hours left there were still a bunch that did even have one bid yet. I knew that there would be a bunch of last second bids, but I figured that I would try to pick up a few for cheap so I threw in a maximum bid on about 7 of them. When all was said and done, I won two of them. Picked up the first pressing on pink, limited to 200 for $8.70, and I also got the Sink With Cali III tour press for $14.50, limited to 125.
Posted by Mike at 8:21 AM No comments: 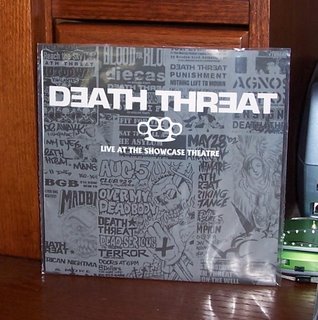 Death Threat 'Live at the Showcase Theatre'. The latest in the Bridge Nine bonus 7 inch series, limited to 500 pressed. This one came with the Bridge Nine singles CD's. The 7 inch is pretty good, but not something that I'm real excited about. I saw Death Threat live a few times, once in Portland, might have been with Bane, and the highlight of their set was the cover of a Chain of Strength song. I seem to remember Paul trying to buy a CD off one of the guys in the band out behind the club, but he didn't have the exact change so the guy gave him the CD for free. Pretty good band, just not one that ever really moved me.
Posted by Mike at 11:23 AM No comments: 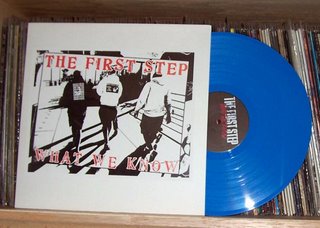 Rob and I drove to Billerica on Friday night after work to catch the Have Heart / First Step show. Our first stop was at Chicago Dogs in Scarborough. The veggie dogs there are so good. After they took our order they realized that they didn't have any veggie dogs ready so I was going to have to wait a little longer. To make up for it they gave me an extra dog for free. Great start to our road trip. Fun drive down, watching out for 'punch buggies' so that I could hit before I get hit. The show was at a Masonic Temple and it was easy enough to find. The show started off with Maintain. They opened the show with a Strife cover. Pretty good hardcore. I thought about picking up their demo for a buck, but I never made it over to their table. After Maintain I bumped into Pete, and we hung out and talked for a little while. I found out that he is going in for a kidney transplant in a couple of weeks, so I wish him the very best. Fired Up played next and kicked out some great old school hardcore. I'm looking forward to their 7 inch that is coming out on Youngblood Records. Hammer Bros were up next and had their new CD available. I thought they were okay, but by the end of their set I was ready for the next band. Verse played next and impressed the shit out of me. Great stuff. For some reason they reminded me of Bane when they were a fairly new band. I have the Verse LP on vinyl and I if I had the extra money I would have picked up the CD version...I was that impressed. The First Step played next. I've seen this band a few times and it is always a fun time. This time was no different and I loved singing along and stagediving. Rob had burned me a copy of their new album a week ago and I was familiar with some of the new stuff. Have Heart played last and this was my first time seeing them live. I wish I knew their songs better so that I could have jumped in and sang along more. Such an energetic band...such a great crowd. Seriously, this show was awesome. I don't get out to see bands live much anymore, and this one was worth getting out for.

This entry is for the new First Step album that I picked up at the show. Limited to 250 pressed on blue vinyl, with the pre-release tour cover. I'm not sure how many of these records they sold at the show, but shortly after Rob and I bought ours, they were all gone. This may be the best record of 2006. 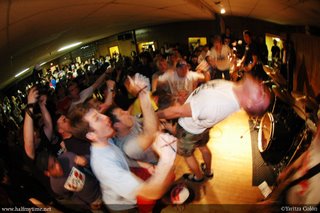