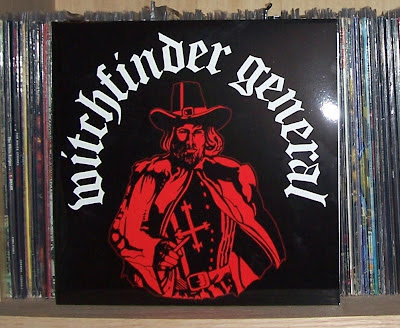 This Christmas holiday came and went, I pulled in a pretty good amount of gift cards for Newbury Comics. I lose all track of time when I go into this store, browsing through all the CD's, agonizing over which ones I will buy. I'm not sure if it is a case of Newbury's not carrying a lot of hardcore and punk CD's that I'm interested in, or maybe it is just that I have been interested more and more in metal, and I've really been looking to replace those old burned CD's with the real deal. Either way, when I walk through the doors, I head straight to the Metal section.
The first thing that I knew I wanted was a Witchfinder General double live album. It was a bit expensive for $27, but the packaging on this was worth it....nice thick packaging including a big book that covers the history of the band and has some nice big photos of their early days. The band was around when the New Wave of British Heavy Metal started to take off at the start of the 80's, and really captured a great Black Sabbath sound. Sure the band is a little immature lyrically, and don't forget those album covers that showcased plenty of bare chested women. But you know what, that is all just a part of their charm.
For the next half hour, I wandered the store...pulling out CD's and then putting them back...trying to make decision on what two CD's I was going to buy. I had the new Soul Control in my hands, but ended up putting that back since I already have it on vinyl (maybe I'll pick it up some time when I see them live), and debated in my head over about 5 other CD's and ended up buying new CD's from Evile and Fueled by Fire...both newer thrash bands that really draw their influence from the mid-80's thrash sound. Cool stuff and now I can toss out those CDR's that I had for each of them.
Still have one more gift card, that I'm already planning on spending on Monday. So much music, so little money.
Posted by Mike at 1:26 PM No comments: 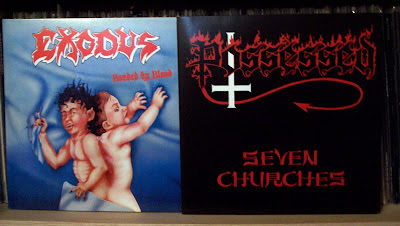