Hurricane Irene is blowing through New England today, and there is a pretty good chance that we'll be losing power or our cable connection some time soon. Seeing that Winds Of Promise was next up in my blogging queue, I figured that today was an appropriate day to get it posted here. 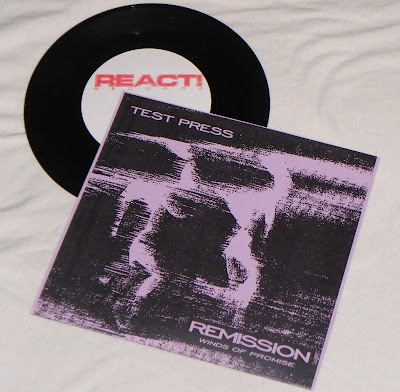 I'm becoming more and more interested in collecting REACT! Records test pressings. Aram recently posted more of his personal collection and REACT! rarities on eBay, and it was my extreme good fortune to win a test of the latest Remission 7 inch. Not only does this record have a good chance of being my favorite release from 2011, but I was able to pick it up for a relatively cheap price. 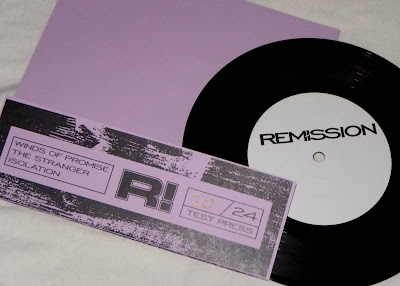 Mike Gets Into The Descendents

I've never really paid too much attention to the Descendents. I owned a couple of thier CDs, but for the most part, they were largely ignored. Sure Marcus jocked them for awhile, but what really got me to seriously check them out was a recent poll on Double Cross, and the write up that Tim did. Look, I respect Marcus' opinion, but when Tim Mouthpiece says that the Descendents wrote some of his favorite songs ever, I'm sitting up and taking notice. 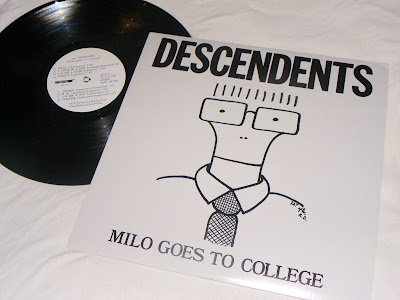 While they aren't going to be my favorite band, I can sure appreciate the Descendents. Sure some of their songs are immature and border on retarded, but damn they keep things upbeat and fun. I had some spare change in my pocket a couple weeks ago, so I picked up this reissue of the Descendents first album. 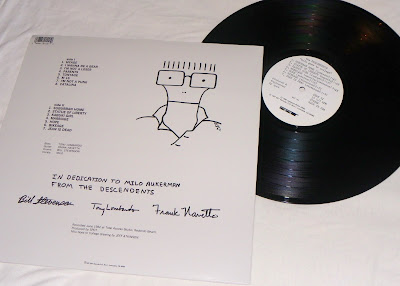 Once again REACT! is coming out strong with another three new releases. Sure it took about seven months for the entire pre-order package to arrive, but with the amount of new records coming in, I'm never in too much of a rush. I know it will arrive when the records are ready, so I don't sweat the wait. 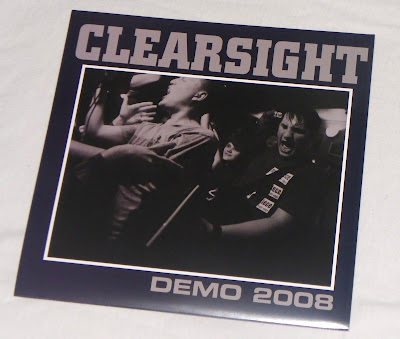 One of the first records from the newest REACT! three pack was the Clearsight demo from 2008. Apparently Aram loved what he heard from this band out of the Ukraine, and wanted to do an EP from them. Unfortunately, the band split before the EP could come together. Still wanting to promote the band, Aram decided to just release a vinyl pressing of their demo. It is doubtful that I would have heard this demo if it wasn't on REACT!, so I'm glad that these songs saw a proper release. Great, fast, no frills hardcore. 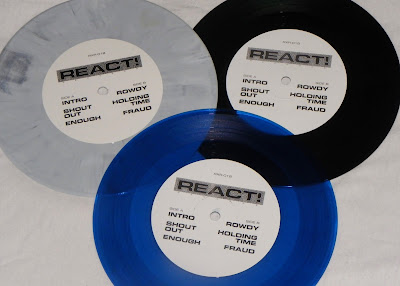 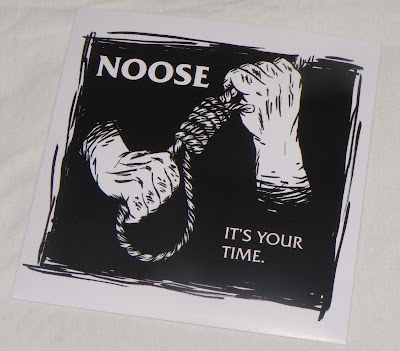 The other demo that REACT! pressed to vinyl was from Noose. They are a Chicago Vegan Straight Edge band, and holy shit, they are fucking pissed. So much rage is captured within the songs on this demo. Get into it, or get the fuck out of the way. REACT! initially stated that this was a ONE TIME ONLY pressing, but the record sold out so quickly, they couldn't help but do a second pressing. 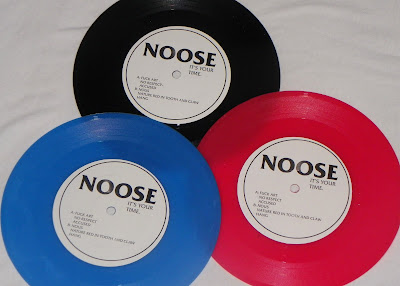 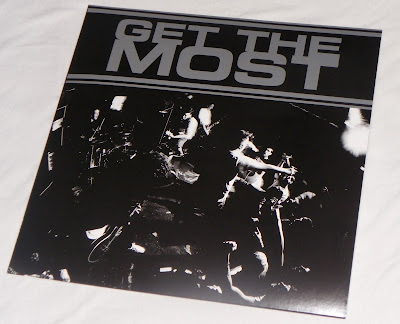 The record that I was most looking forward to was the new Get The Most LP. As this compiles the band's demo and two 7 inch recordings, there really isn't anything new here, but I was excited to finally get proper digital files for the Moment In Time songs...thank you digital download! Plus, Get The Most is one of my favorite bands from the past few years, so new vinyl from them is always a good thing. Too bad the band is calling it quits and will be playing their last show next month. 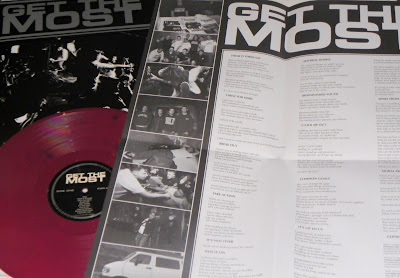 This LP comes with a HUGE poster/lyric sheet. 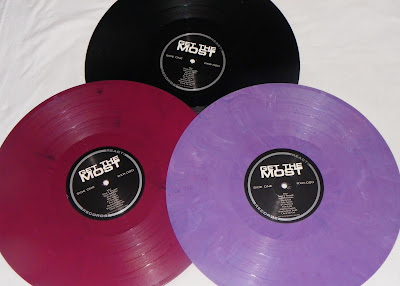 Labels: Get The Most, REACT

I own a lot of music. More music than most people could probably keep up with. My database shows that I've got over 1,700 CDs, 1,100 7 inches and 900 LPs (not to mention the 650 albums that I've downloaded but have not purchased yet). Yeah, I've got enough music to go years without repeat listens. I'm extremely lucky to be able to listen to music for much of my day. I can use my iPod throughout the day at work, and my wife is extremely gracious in letting me play pretty much what I want when I'm at home. If I didn't have all this time available to listen to music, I don't know how I'd be able to keep up. Still, because of the sheer volume of music that I own, some albums can fall off my radar and not get listened to for years.

Fugazi is a fine example of this neglect. Man, I can't remember the last time I listened to this band. Feels like it has been ten years since I last gave them a spin. I'm not sure what triggered me to pull them off the shelf again, but it most likely could have been the recent Dischord remasters that made me pay attention to their earlier records again. 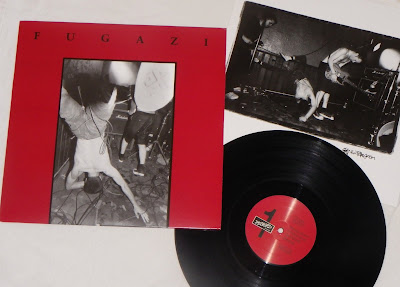 The truth is, I never owned copies of their first couple of records. Instead, I've relied on a burned CD copy that I must have recorded from the copy my brother owned. I don't think that the recent Dischord remasters of 7 Songs and Margin Walker are all that new (remastered in 2009?), but I figured that it was time. Shit got too arty for me by the end of their career, but I had forgotten how much fun those early records were. 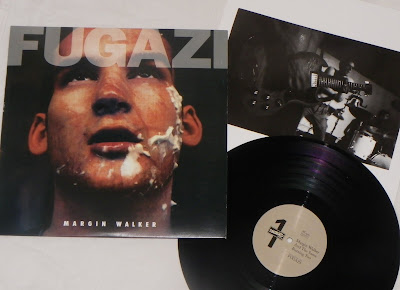 Regardless of whatever happened to Ian's face for the cover of Margin Walker, Fugazi was at the top of their game up through Repeater...and while I can hang with them for Steady Diet of Nothing and In On The Kill Taker, they can't come close to the greatness of those first few records.

Remission released a new 7 inch earlier this year on REACT!, Police & Thieves are supposed to have a new record out later this year on Youngblood, and between those two releases, Amendment Records gives a split 7 inch with both bands. 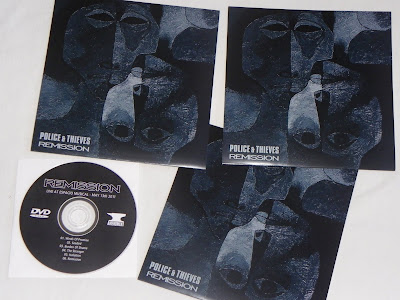 I love both of these bands, so ordering all three pressings of the new 7 inch made sense to me. As a bonus, Amendment threw in a bonus DVD that contains a live Remission show. Quality. 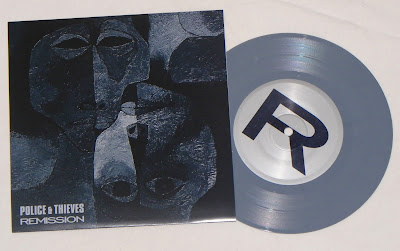 Remission fucking rule Hardcore right now. Holy shit, this band can not do wrong. Following up their amazing Winds of Promise 7 inch, these two songs follow the same path. I know that I've always compared them to One Step Ahead and Verbal Assault, but something about these new songs also remind me of 411. Seriously, it sounds like Dan O is going to jump in and sing a verse of Seeded. I can not get enough from this band right now. 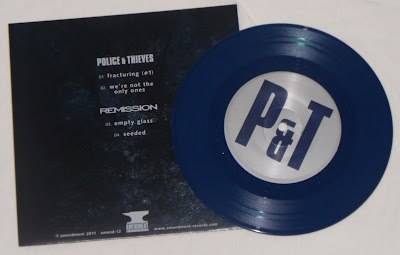 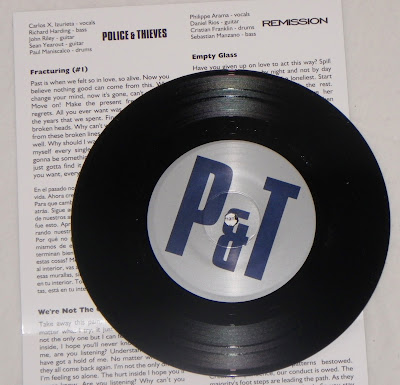 I've been lucky enough to catch Police & Thieves live a couple of times over the past year. When I first heard their Amor Y Guerra record a couple years ago, I really liked it, but seeing them live and repeated listens of those songs only made me appreciate it more and more. We got a teaser from Youngblood last year with the Blizzard Sessions cassette, but I'm thrilled to get two new songs with this split. Great stuff, that leaves me looking forward to the new record even more. 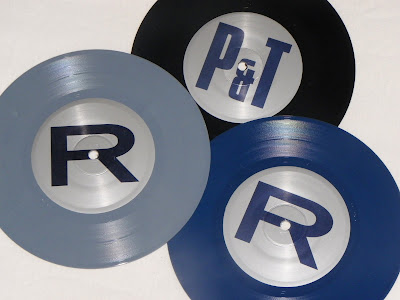 Set adrift.
They drift away.
I reach to save them.
But how can I save those who won’t save themselves.
Goodbye. 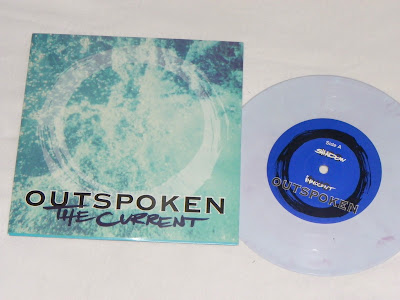 Outspoken had some pretty powerful lyrics in their songs, and the words to Current may be one of my all time favorites. Therefore, I was pretty excited when New Age Records recently reissued the final, and best, Outspoken record on vinyl. 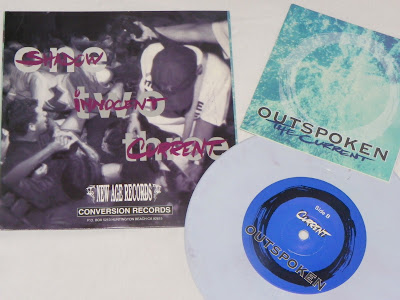 I don't have the original pressing of The Current on vinyl, so I'm not sure if this CD booklet insert is a cop out for this reissue. Did New Age go this cheap with this insert the first time around? 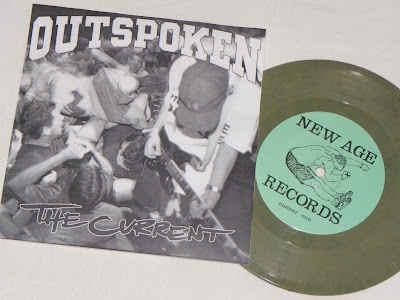 Keeping with their reissue tradition, New Age also did a limited "77 pressing" complete with the limited alternate cover and Walk Proud record labels. 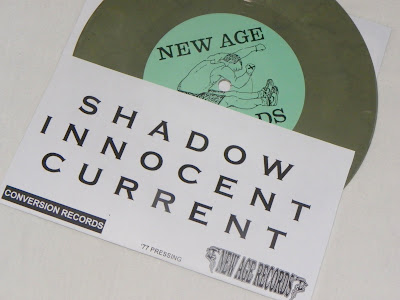 Probably the biggest bonus for this New Age order was that my records didn't take 6 months to arrive. Seems that they now have someone reliable managing the distro for New Age, and my order got here within a week.

I loved the 2008 demo from Alert, and have been eagerly awaiting some new material from this band. Mike and Keith are such nice dudes, and I will travel to Massachusetts whenever I get the opportunity to see them play live. Therefore, I was really happy to hear that Six Feet Under was releasing their new record. These guys deserve nothing but the best, so I hope that SFU gives them a lot more exposure. 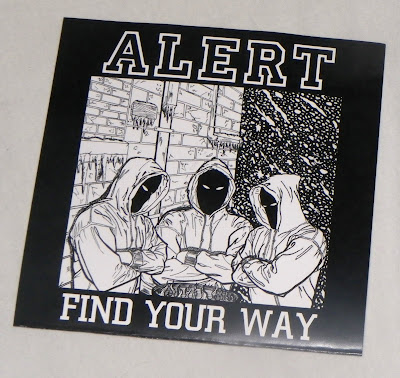 While the new record should be shipping in the next few weeks, Alert played their record release show recently and a special pressing available. The show was in Pennsylvania, I believe, and not in their home state, so there was no way that I was going to be able to make it. Come on boys...what were you thinking?!?! Still, they were nice enough to put the leftover merch up in their webstore and I was able to grab the record release pressing. 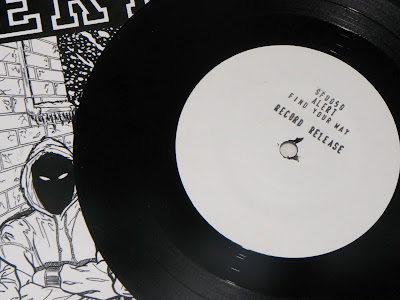 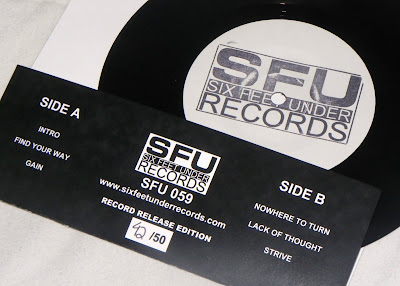 Numbered and limited to 50. 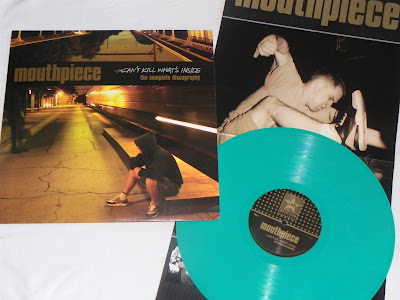 Every time I've seen Mouthpiece live, it has been an EVENT. Line ups so monumental, that they would make it onto my list of Top 10 Shows Of All Time. Back in '93 with Strife, 4 Walls Falling, and Endpoint...again in 2000 for In My Eyes last show, and finally for the 2004 Youth of Today reunion in Pennsylvania. The band embraced the Straight Edge label when most kids in the early 90's were "too cool" for it..."Yeah, I don't drink or do drugs, but I don't want to call myself Straight Edge.". Fuck that. There was Mouthpiece, X'd up and proud of the label. Band will always have my respect.

A wise man once wrote "I should have more Youth Of Today records in my life". There it was, a truth that so obvious that I couldn't believe that I hadn't thought of it myself. I know that I'm never going to have an impressive Youth of Today collection, and when Revelation Records reissued Can't Close My Eyes, I gave it a moments thought and moved on. When I read those words however, I knew that even though I would probably never own some of their rarest records, I still needed to buy the vinyl for one of my favorite hardcore bands of all time when the opportunity presented itself. 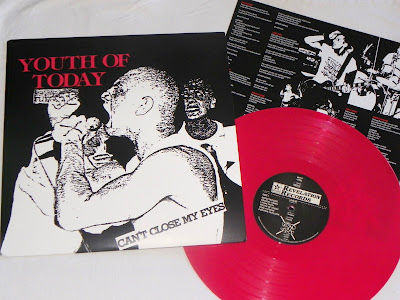 There has been all kinds of talk about the reissues that REV did for Youth of Today in 1997. The general consensus was that they looked like shit, and for the most part, I'd agree. So it was nice to see that lessons were learned and REV went back to the original artwork for the 2011 pressing. I don't own an original Positive Force pressing, nor do I own the vinyl for the Caroline re-press, so I can't compare them...all I've got is the Can't Close My Eyes cassette from Caroline. Maybe I'll get there someday. 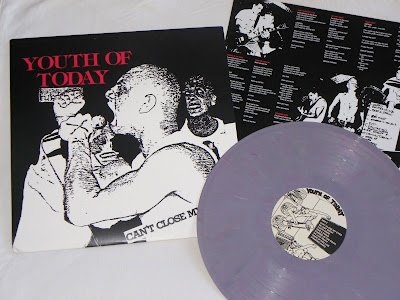