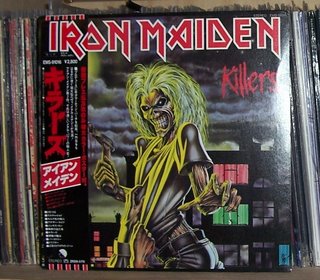 When I first started collecting Iron Maiden vinyl, I knew that I wanted a Japanese pressing of Killers with the OBI strip. While I was browsing the Maiden records on ebay, every once in a while I would see one up for bid. I'm not sure what it was about this record. Maybe it was the OBI strip with the record title written in Japanese, complete with the bloody font. Maybe it was the insert that was limited to the Japanese pressing. Whatever it was, I had to have one in my collection. While watching them on ebay, they were selling for around $40, plus the shipping from Japan, so I kept passing them by. Then a few weeks ago I was able to grab one for $19.50, and the seller was from the States so shipping was only $5. Perfect. Now that I have this one, I'm thinking that at some point I'd like to get other Japanese pressings for the other Maiden records.
Posted by Mike at 7:20 PM No comments: 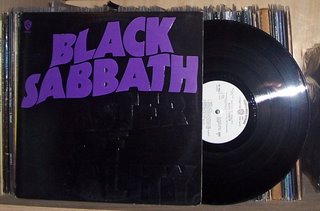 I recently won a copy of Black Sabbath's Master of Reality off ebay recently. This thing looks amazing...such great condition...and to top it off, it has a white promo label and the original poster. Won it for $30, and is a great addition to my Sabbath collection.
My Sabbath collection is pretty pathetic right now. It consists mostly of the Earmark Records reissues that were released a couple of years ago. I think my only non-Earmark records are the Mob Rules and Born Again LP's, plus the Canadian pressing of Masters of Reality...oh yeah, I almost forgot the Korean pressing that I have of Volume 4.
A friend of mine recently directed me to a great site that documents the Black Sabbath discography at http://sabbath.se/. This site details all the different pressings for the Ozzy era with Sabbath. Seriously, the quickest way for me to gain interest in collecting vinyl for a band is if I have a list that I can use to check them off one by one. Judging from the size of the the list, the Sabbath collection will be a work in progress for many, many years.
Posted by Mike at 5:14 AM No comments: 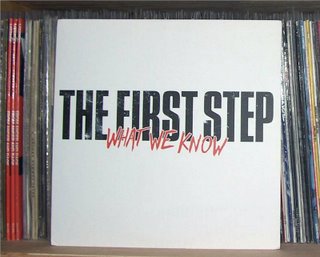 I was able to get myself a copy of the Euro pressing of the new First Step album...my fifth copy of What We Know. Rivalry Records posted on their website that they had around 25 copies available, a mix of the white cover and the regular cover, both on grey vinyl. I noticed the posting a couple of day after they put it up, and I expected that they would have already been sold out, but surprisingly, I was able to order one, requesting the white cover. I was happy to get my hands on one. I had almost ordered one through Not Just Words Records, but the shipping from Europe was ridiculous so I passed on it. Glad I waited. This pressing with the white cover is limited to 270.
I love this record...it may even beat out Betrayed and Have Heart for my favorite for 2006. It is just so much fun. It really reminds me of those days when I first heard bands like Insted. Great positive straight edge hardcore.
The First Step
What We Know
Not afraid to say what's in my heart
Even if you put it down or tear it apart
We're standing on a solid foundation
Built on caring, honesty, the edge, and dedication
Posted by Mike at 9:07 PM 1 comment:

Scream For Me Boston!

Time for another trip to Boston, this time to see Iron Maiden. I had not seen these guys live since I was 18, when they played in Maine for the Seventh Son tour back in '88 or '89. Since some kind of nostalgia had kicked in a couple of years ago, and I've been on a supplementing my punk rock/hardcore diet with some metal and hard rock, I was excited to go see them tour for their new album. My friend Jeff was a member of the Maiden Fan Club, so he was able to buy tickets before they went on sale to the public, getting third row tickets, center stage. We planned that it would be fun to head down to the show with our wives and spend some time in Boston before the show.
We ended up leaving a little later than expected, but we still had plenty of time to stop at Nuggets to do some record shopping. Having Meesh and Jen with us didn't afford us the luxury to really take our time and browse, but I was able to pick up a few things.

After shopping and grabbing dinner at Bertucci's, we head up to Boston University for the Maiden concert. Having seats on the floor at a rock show was kind of weak, but it did mean that I was able to stand with my wife and friends for the show. Iron Maiden threw us a curve ball, playing the entire new album, start to finish, and then ended the show with a small handful of classics like Fear of the Dark, 2 Minutes to Midnight, Iron Maiden, The Evil That Men Do, and Hallowed Be Thy Name. While I was disappointed to not hear more of the older songs, hearing the new album live did make the experience more memorable and special. 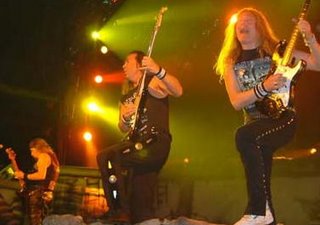 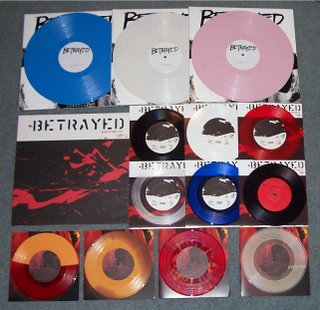 Here is my Betrayed collection. It is complete unless a Final Show pressing of Substance is made.
The Addiction 12 inch came from Aram. He sent me a message saying that he grabbed a copy for me when they were touring Europe...a "thank you" for helping him out financially earlier in the year when I bought a bunch of records from him. A very kind and thoughtful gesture, but seriously, I was thrilled to have the opportunity to buy the records that I got. It took him a while to mail out the Addiction 12 inch, and after a couple of weeks I noticed that a pink pressing of Substance was sold at the Sound and Fury fest out in California. I dropped him a line to see if he had any that he could spare, and as luck would have it, he did. Sold it to me for $15 and sent the Addiction 12 inch along with it, completing my collection of Betrayed vinyl. This shit is the pride and joy of my record collection...thanks Aram, I couldn't have done it without you.
Posted by Mike at 4:20 PM 1 comment: