I don't get out for shows very often these days, but some how I ended up with one a week for a three week period. Last week, Rob and I caught the spoken word gig from Henry Rollins, this week was True Colors, and next week will be the Killfest with Overkill. Paul and I made the trip to Haverhill, Massachusetts a couple days ago for True Colors. I missed them the last time they toured North America, and there was no way that I was going to miss them this time through. 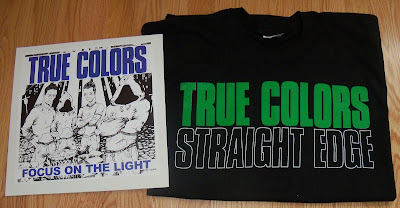 The whole night was a blast, and I enjoyed every band that played. Caught In A Crowd started the show with a nice youth crew sound. I'm not sure what it was, maybe it was just my exceptionally good mood, but there was something about watching these kids tear through their set on the small stage at Anchors Up...it just reminded me how special hardcore is to me. Here was a new band of kids, playing a style of music that I fell in love with about 20 years ago. There was nothing pretentious about it...just some friends playing music that they love and having a good time doing it. They had demo tapes for sale, but I'm fighting the tape revival tooth and nail, so I didn't buy one. Next up was Street Sweeper. They had a great Lockin' Out vibe going on, and it made sense that Justin DeTore and Doug Cho from Rival Mob helped the band record their Stylin' On You demo. I was really looking forward to Alert. I've been listing to their demo 7 inch a lot since the Mindset show a few months ago, and couldn't wait to get up front and sing along. They played a great set, and it was cool to catch up with Keith and Puffer during the night. 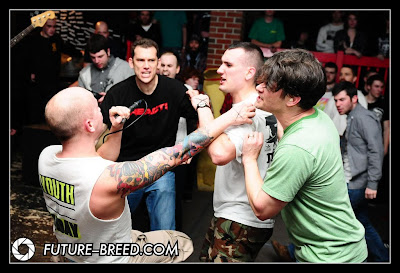 The crowd was pretty small for a Thursday night, but I still hung around at the front of the stage with a few guys for the True Colors set. When they started everything off with a Straight Ahead cover, I lost it and found that I would have moshed over puppies to get up to the mic to sing along. The singer had tremendous energy and was all over the stage for the entire set. The Rival Mob ended the night. This was my third time seeing them, and they just get better each time around. The singer know how to work a crowd, and if I had known their songs better, I would have piled on to the crowd that gathered for the chorus of Mob Rules All and Raw Life. Intense. I need to pull out the vinyl I have for their album and give it another spin. 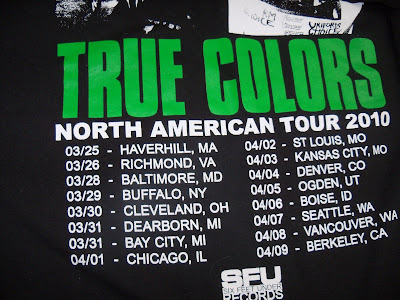 I made sure that I was first in line at the True Colors merch table, and as soon as I saw the True Colors Straight Edge North American Tour shirt, I knew that I had to have it. There is something about a tour shirt with dates and cities on the back that is special to me. 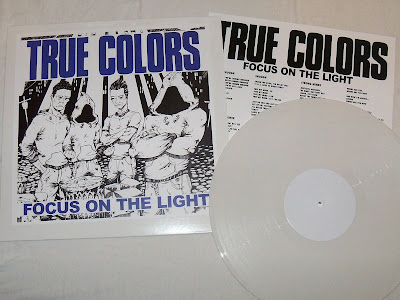 The band also had a tour pressing of Focus On The Light with them. This was the same white vinyl, blank label pressing that Six Feet Under used for the special release of the album at the end of 2009. This one comes with a special screened cover. This now gives me 5 different pressings for this album. All of them are from Six Feet Under, and I don't own a single copy of the Powered pressing. 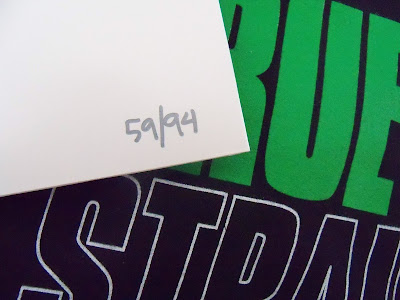 The back of the album cover is plain white with the exception of the hand numbering down in the lower corner. True Colors had a sign up that said they only had 40 left, and I got number 59 of the 94 pressed.
Posted by Mike at 5:03 PM 1 comment: 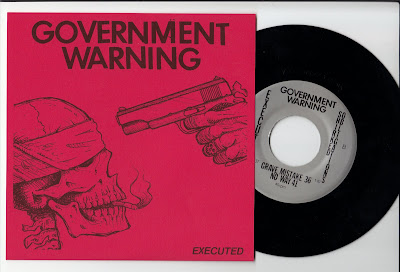 Back in 2007, a fellow blogger, Tyler, introduced me to Government Warning. Tyler was a good kid, and while I was struggling to keep up with what was new in the punk/hardcore scene, he helped keep me in touch. He made the conscious decision to step away from the internet over a year ago, and he let his blog die. Government Warning, however, are still cranking out records. Their newest 7 inch continues down that same road of attitude filled punk. Only three songs on this one, and one of them is a Battalion of Saints cover. Punk rock, don't stop.
Posted by Mike at 5:55 PM No comments:

I recently dropped a ton of money on pre-orders from REACT! Records. The label had 3 records go up at the same time, and since I needed 3 different colors of each one, it quickly added up to a big chunk of change. That was it, I told myself, I'm done spending money for the month. Then Jim Hesketh, the singer for Champion and ON, posted a link on the REACT! board for some stuff that he was selling on eBay. Fuck. How am I supposed to just walk away from that? I don't know, there is just something special about buying a record from someone in the band...but maybe I'm just a geek fanboy like that. Jim was selling some crucial records, and since the ON test press was going to be out of my league, I focused on the record release of the band's second 7 inch. 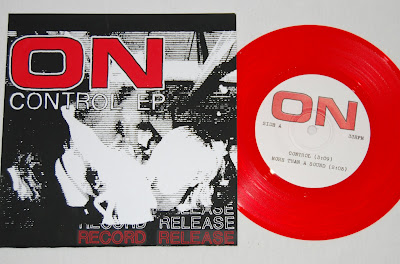 The record release comes with a nice alternate cover and was pressed on red vinyl. 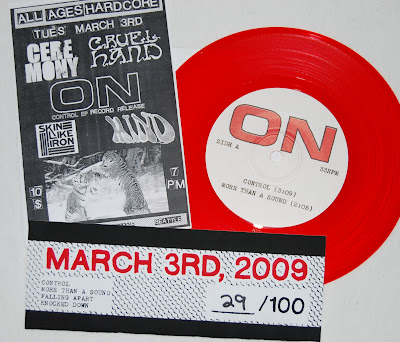 The back of the cover is hand numbered out of 100, and has the date of the record release show. The date looks strange to me. I'm not sure why they didn't just put March 3, 2009, instead of making it March 3RD. Just doesn't look right. The record also came with a mini flyer for the show, which was a great touch. 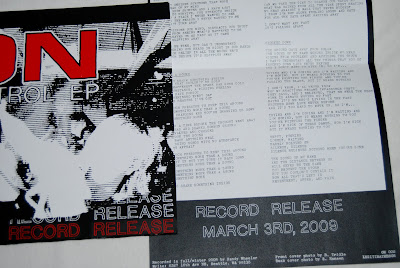 Finally, the record release date was included on the lyric sheet insert. Quality release all around.
Posted by Mike at 6:43 AM No comments: 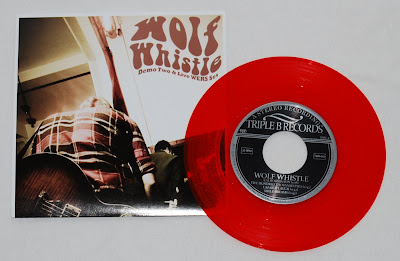 I'm not terribly excited about this post. In case you don't know, Wolf Whistle features Pat Flynn, of Have Heart fame, on vocals. If you want a Have Heart knock off, you will want to look somewhere else. Wolf Whistle is ugly...nothing uplifting here...just pure rage in the same vein as The Swarm or maybe Mind Eraser. I may be off base on the Mind Eraser comparison, but I'll use it because, like Wolf Whistle, they don't leave a lasting impression on me. It's not that I don't like it, it's just no longer a style of hardcore that I easily embrace. I'll continue to give it a spin...my buddy, Rob, really likes them and I will be going to see them play with True Colors in a couple of weeks, so I'll keep kicking it around and see if it grows on me. This copy is from the second press on Triple-B Records and limited to 200.
Posted by Mike at 8:54 PM No comments:

At the start of 2010, Aram decided to sell off some records to help clear out some debts from running REACT!. The guy was selling so many great records, and I was feeling pretty broke after the Christmas holiday, so I tried to limit my spending. He had one Have Heart pressing of the demo on Bottled Up that I didn't grab, and I have regretted not buying it when I had the chance. Who knows when I'll see it come around again. 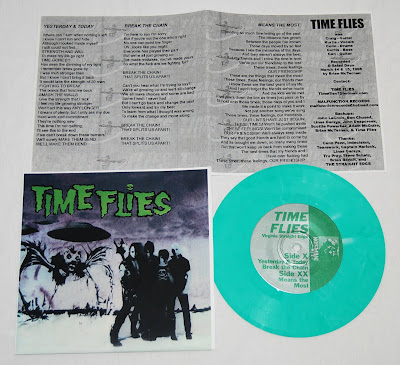 I had missed the opportunity to grab the Time Flies 7 inch with the Misfits rip off cover a few weeks back on eBay. When I saw that Aram was selling his copy, I didn't hesitate to pick it up. I love the Walk Among Us cover, and Time Flies did a great job with it. 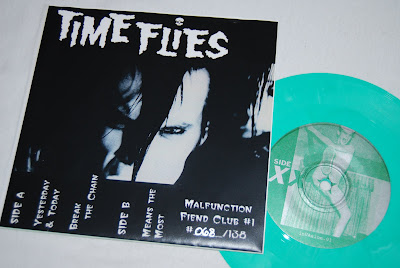 Malfunction Fiend Club. Number 68 of 138. Time Flies is one of those bands that I've been thinking about collecting for a long time now. This record looked so good, that I'd figured that it was time to get it started. 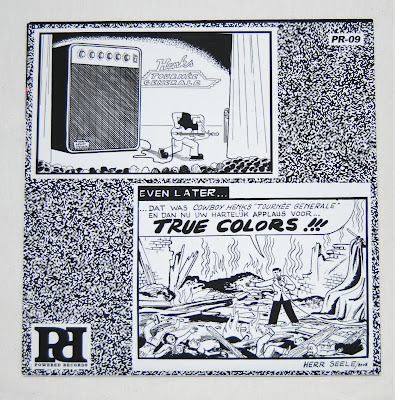 The other one that I bought from Aram was the record release pressing of the Perspective 7 inch from True Colors. I had never seen a copy of this and had no idea what it would look like, but I really like True Colors and therefore I needed this for the collection. 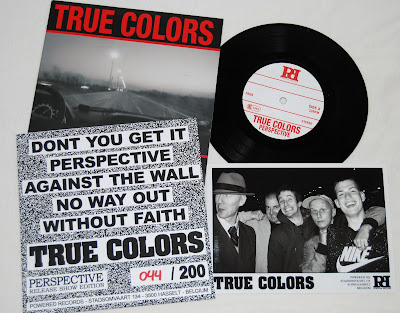 The record release pressing comes with a cool looking comic strip style cover, hand numbered 44 out of 200, plus a promo shot of the band.
Posted by Mike at 5:19 PM 6 comments: 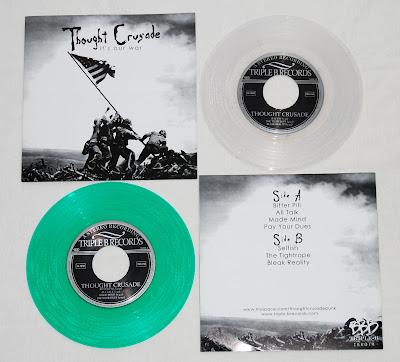 If you are into hardcore at all, then I don't understand how you couldn't be more stoked on the current scene. There are so many great bands that are out there right now. I've got a burned CD that includes Alert, Face Reality, Not Sorry, and the latest in my long list of loves, Thought Crusade. Seriously, the four seven inches released by these bands over the past year get constant rotation in my vehicle and daily playlists. Throw in the incredible REACT! Records roster, and hardcore is running at the top of it's game right now.

I'd never heard Thought Crusade before, but last month Stephen from The First Step posted on the REACT! messageboard that he was looking for mp3s of their new 7 inch. Someone posted a link, so I figured that I'd check them out. Damn, I was immediately impressed. Their song, The Tightrope, has got a hook that doesn't let go, and makes me want to sing along and stagedive. After listening to the mp3s of the It's Our War 7 inch, I headed over to the Triple B Records site and ordered a copy on green vinyl (limited to 400). A couple of weeks later, I was able to pick up the pre-order pressing on clear vinyl (limited to 100) from eBay for only $3.00. 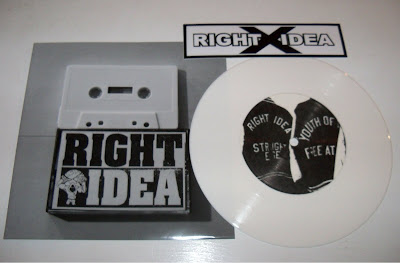 A couple months ago, Right Idea put up vinyl copies of their demo in their webstore. Since this was released on Refuse Records overseas, I was glad for the opportunity to pick it up without having to pay for the extra shipping. This was originally listed in the RI store as black vinyl, but a couple of days later Jeff Hess sent me an email saying that there was some confusion and they only had it available on white vinyl. He didn't even think that it was pressed on black. I have no idea what the pressing info on this is, but I'm glad to see this get pressed on vinyl, since there was very little chance that I was going to buy the cassette release. 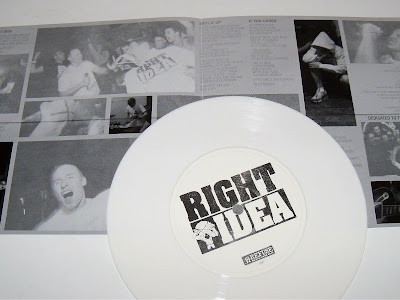 I'm not sure how I found the time to put up double digit posts for the month of February. Seriously, I'm feeling totally tapped for spare time, and I'm finding it harder to keep this thing updated. I spent some time earlier this week travelling to New Jersey for business. Now that I've got that out of the way, hopefully I can get back on track with the blog. Speaking of Jersey, let's move this along to the new Overkill album. 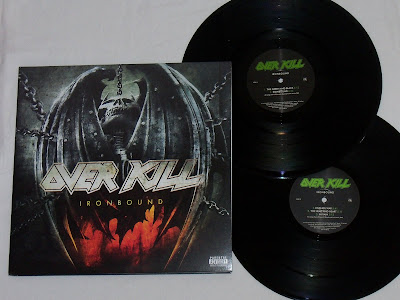 In less than one month, Rob and I are taking a trip to the Paladium in Worcester to catch Killfest 2010...an eleven band metal fest, headlined with Overkill touring for their new album, Ironbound. Man, this new album is so good that I would put it right up next to their classic late 80's output. If it seemed like Metallica's Death Magnetic should have followed And Justice For All, Ironbound feels like it fits in as a hell of a follow up to The Years of Decay. The best part of this release is that Overkill has finally decided to give the album a proper vinyl release, and didn't do another friggin picture disk.