Still Here After All These Fucking Years 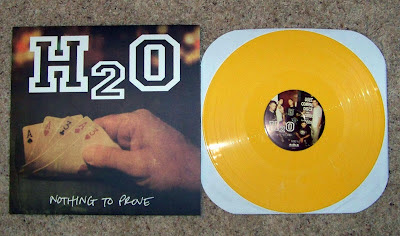 H2O have been around forever. I remember buying their 7 inch on Equal Vision Records back in the late 90's, and falling in love with their pop induced old school hardcore sound. I've seen them a few times since then, a couple of times in Massachusetts during their earlier years, and then in Portland, Maine with Saves the Day opening up for them. The last time I saw the band live, they were opening up for Sum 41 at the State Theater in Portland. Huge pop punk crowd, barriers between the stage and crowd, and to top it off, I don't think that they played anything off the first album. It was still a fun time, but a far cry from the kind of show that I had come to expect from H20. While I still enjoyed them, I had pretty much written them off as a serious hardcore band...then, here they come, roaring back in 2008, recording a new album for Bridge Nine Records. Nothing To Prove is a huge step up from their last album, Go!. Sure there are some songs that border on too poppy for me, but the majority of the songs on the new album are just killer. If you know me at all, you could guess that Still Here is my favorite song on the album. While it doesn't pack the same punch as Betrayed's Proud to Be, the heart and meaning is the same. A great Straight Edge pride song, without being preachy or condescending. Awesome.

To all the new kids, this is a way to live

It's not a passing trend, a way to fit in

I never preached shit, I just spoke my mind

To live a positive life and don't waste your time!

Nailed to the X, man, I lived this shit, I am a SEOG don't ever forget it!

All my friends did it all, but I never gave in! 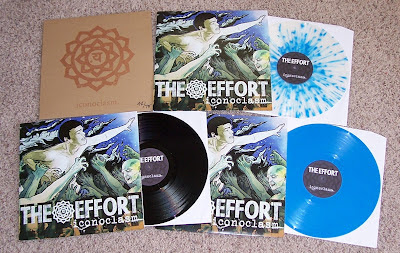 When pre-orders went up for the new full length album by The Effort, I was optimistic that it was going to be a strong record. So optimistic in fact, that I ordered the package deal getting the special pre-order pressing with the silk screened cover (mine was number 42 of 75), the black vinyl pressing (limited to 225 pressed), solid blue (250 pressed), the blue/clear splatter (350 pressed), plus the CD and a t-shirt! I was just so impressed by the bands set at the Edge Day show, that I decided to drop some money on this release. Over all there are some great moments on this album. It didn't really grab me immediately, but some of the songs are starting to sink in, and I'm starting to dig this more and more. The Price Of Medication is such a killer song...and Sweet Pete from In My Eyes does guest vocals on Black Sheep. Pete's vocal delivery is very different than I ever heard from him...very raw.
While I still need to build another wall of shelving for my Music Room, this weekend I decided to move in my record collection. Since I had some available space I was also able to put about about a quarter of my CD's in a temporary home. 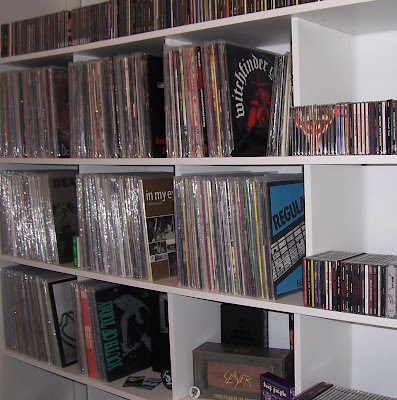