I've got a few orders that I'm waiting for from REACT! Records. If you thought that they were running shit in 2009, then 2010 is going to blow you away. The label dropped three pre-orders at the end of January. Aram couldn't catch a break and there were countless delays, but unlike New Age records, REACT! keeps you informed of what is going on with the orders. I was happy to receive them about a month ago. 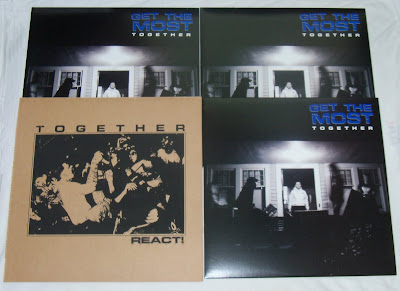 First up was the album that I was most anticipating, Get The Most's LP, Together. Their two 7 inches quickly made them one of my favorite bands going right now, and I could not wait to check out the LP. 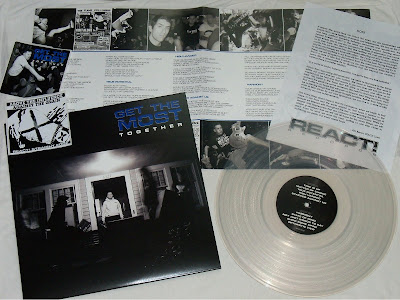 The album does not disappoint...excellent straight edge hardcore. Of course the packaging is the same high standard that you would expect from REACT!. 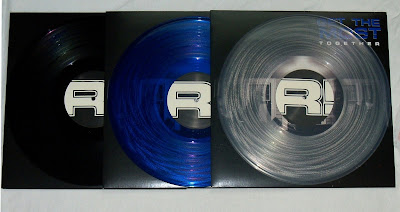 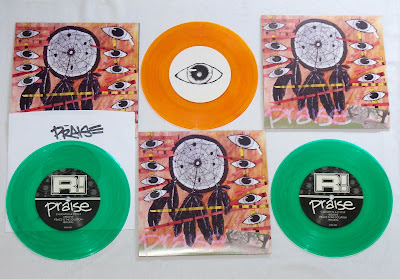 Along with the Get The Most pre-orders, REACT! also put out a 7 inch from a band called Praise. I wasn't too into the artwork for the 7 inch, but the music on this record will put aside all thoughts of doubt. Melodic hardcore in the vein of Dag Nasty or 7 Seconds. The singer, Andy, played in Champion, throw in a couple of guys from Mindset, then add Stephen from The First Step to help out out with one of the songs, and this band can not lose. Amazing. 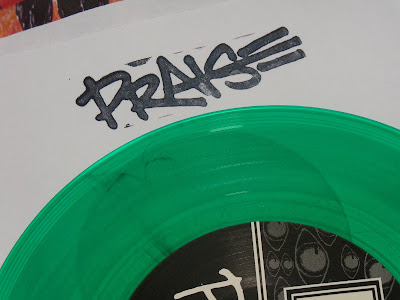 I got lucky with this one, as Aram threw in a transition pressing. You've got to look really hard, but there are a few black streaks in the green vinyl. There were only 55 transition colors that have the Praise stamp on the dust sleeve. 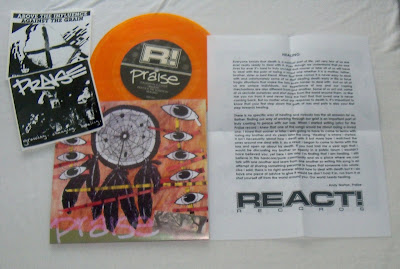 Again, great packaging from REACT!. 200 pressed on orange and 300 on green. Since I got the transition color, I guess I still need to order the black vinyl for this one. 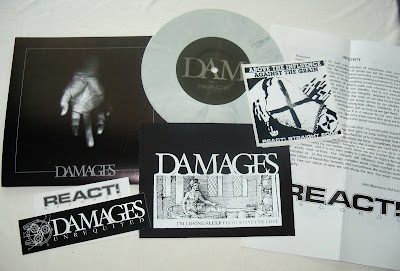 Damages play a style of hardcore that I thought had died back in the late 90's. The band would have fit right in on the Ebullition roster with the style of emo/hardcore. To be honest, I really had no interest in checking out this band, but they were on REACT!, so I bought it to keep the collection together. To my surprise, I found myself really liking this band. I really used to love bands like Shotmaker, Policy of 3, and Downcast back when this style dominated hardcore, but I kind of left it to collect dust about 10 years ago. Damages made me dig out those old Current and Moss Icon records, and reminded me that, when done right, this style of hardcore can still be pretty cool. 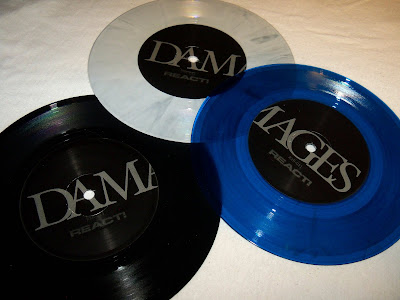 Labels: Get The Most, REACT

I'm trying to break the CD habit. The main reason that I still buy CDs is out of convenience. Each day I pick a stack of 15 CDs and head out the door to work. I listen to CD's in the car, and on my stereo in my cube at work. This means that if I own it on vinyl, I've got to burn it to CD if I want to listen to it on the go. 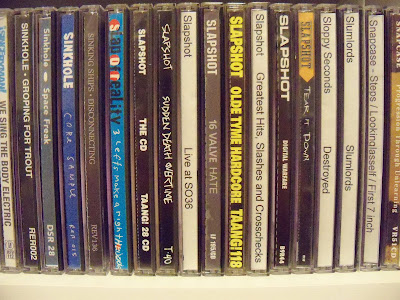 I hate burned CDs. I'm a visual kind of guy, and when I'm surveying my walls of vinyl and CDs...when I'm admiring my shelves, the homemade burned CD's with their generic spines stand out as an eyesore. I hate the way they look...so plain and uninspiring. Which is why I will sometimes buy both the vinyl and the CD. Those days are coming to an end, and I'm counting on my new ipod to be my savior. I'm sure that this won't mean the complete death of CD's for me, but it will allow me to focus more on vinyl. 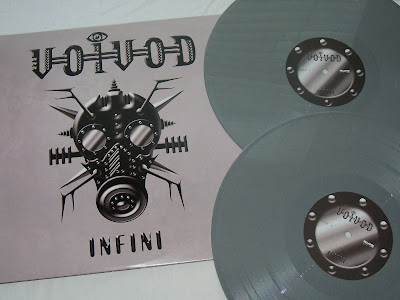 So with that said, I picked up the new Voivod LP, Infini, the other day. Where I typically bought most of my Metal purchases on CD, this time I didn't hesitate to pick up the vinyl copy. Of course, Infini is not nearly as good as Voivod's first four albums...hell, there is no way that Metal from 2009 is going to measure up to 1987, so there is no point in really comparing them, but still, Infini contains some great songs...God Phones and Volcano are both amazing. Solid album. 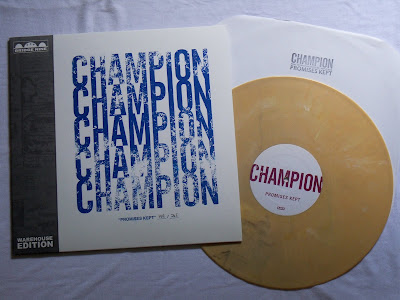 A while back, Bridge Nine cleaned out their warehouse. They found some loose vinyl with no sleeves, so they packaged them up with a special Warehouse Edition sleeve and put them up in their webstore. Outbreak, the Black Friday '29/Death Before Dishonor split, and No Warning all got the Warehouse treatment, but the one that I REALLY wanted was Champion's Promises Kept. No Warning and Champion sold out before I could get one, and I was PISSED...so pissed, in fact, that I said "fuck it", and didn't even bother buying the ones that were available. I moaned and groaned, whining about it on various different messageboards. Eventually I got an email from Aram saying that Bridge Nine was going to send him a few, and that he would set one aside for me. I was thrilled, but over time, the record never arrived. Seems as though Aram didn't get very many copies and didn't have enough to go around. That's cool, I was glad that he had made the effort, but now the mission was mine. I finally came across one on eBay a couple months back, and was happy to finally add this to the collection. 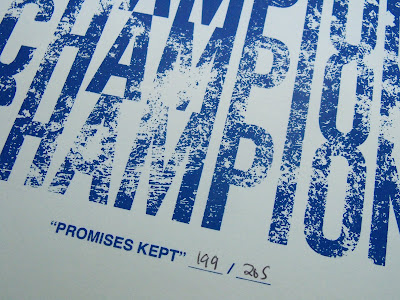 It wasn't the most limited of the Champion Warehouse Edition. 205 were made with the left over vinyl from the last show. Not as cool as the one that Doug got, but I'm still happy to have a copy to once again complete my Champion collection.
Posted by Mike at 10:20 AM 2 comments: 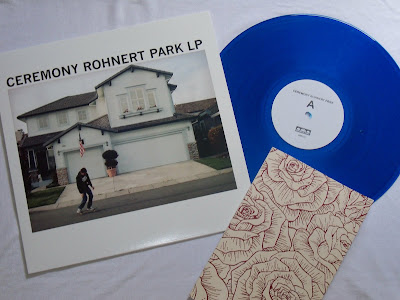 When Bridge Nine posted pre-orders for the new Ceremony LP, Rohnert Park, I spent the extra money and ordered the package deal. The pre-order package included a book written by Ceremony's singer, Ross Farrar, which featured all of his lyrics for the band, along with explanations for what the songs mean. At the time, I thought that the book was limited to the package deal, but now it appears that you can buy the book on it's own...which somehow makes it feel less special to me. 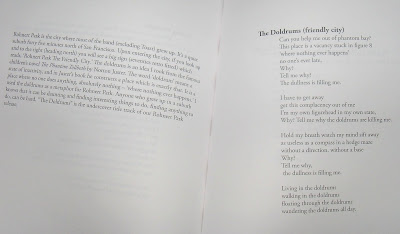 The record itself, well, I'm not completely sold on it. There are some songs that absolutely kill, and there are others that are more experimental than Ceremony's other stuff, and are outside my "Ceremony comfort zone". I don't know, maybe the whole thing will grow on me, as all Ceremony stuff tends to do. 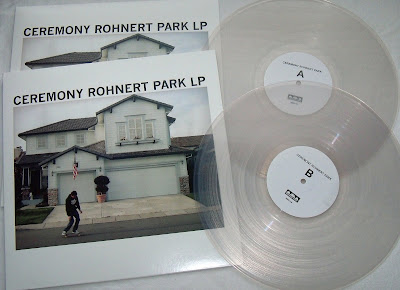 Along with my Ceremony package deal order, I also ordered the last two pieces of colored vinyl for the Underdog double LP. Ummm...yeah, Bridge Nine sent me two copies of clear vinyl for the Ceremony LP. Okay, so I didn't get the most limited color for the Ceremony LP, the book wasn't limited to the package deal, and I didn't get the two Underdog records that I was looking forward to. "Pack my fist full of hate and take a swing at the world...".
700 pressed on clear vinyl, and 1,000 pressed on blue.
Posted by Mike at 1:11 PM 6 comments:

If it isn't money that is short, it is time. Records are coming in and stacking up, and I don't have the time to sit and enjoy them. Seems like everything else has been demanding my attention, and I have been letting the music take a back seat. I've been meaning to get those priorities straightened out this month, but that has yet to happen. 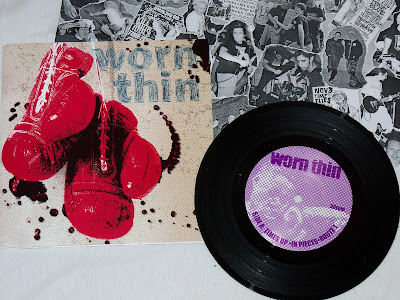 A couple of months ago I won a bunch of records from some dude on eBay. I don't own many pieces of Worn Thin vinyl, and since the auction for the self titled 7 inch was set to close at 99 cents with one bid, I figure that I might be able to pick it up for cheap. It ended at $3.25 and it was all mine. The seller listed it as limited to only 187. Can anyone confirm that?
Posted by Mike at 9:33 PM 2 comments:

Somewhere along the way, I got old. I'm not sure when it happened, but at some point over the last 5 years I really started digging 70's rock. It started innocent enough at first, you know, kind of discovering the brilliance of Deep Purple and Alice Cooper. Then, before you knew it, my stereo speakers were rockin' some early Blue Oyster Cult and Led Zeppelin. By then it was too late, and I was falling in love with early Aerosmith and some band that I've hated with an unholy passion for all of my life, Whitesnake. Damn, how did this happen. From the moment I was introduced to David Coverdale and Tawny Kitaen in Whitesnake's 1987 video for Here I Go Again, I hated that fucking song...hated that fucking band. In the war on hair metal, I was firmly in the Slayer camp, hating poser pretty boys like Whitesnake. 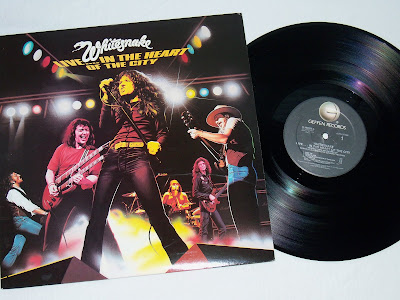 Yet, here I am 25 years later, seriously looking to add the first 6 or 7 Whitesnake albums to my vinyl collection...you see, I still think the self titled album from '87 is highly polished piece of shit, so my obsession ends there. But in the last five years, my love of Deep Purple properly introduced me to David Coverdale when he took over as the band's singer with their Burn album in 1974. What I found was heavy and passionate 70's rock that I could no longer deny. Eventually, that bluesy rock sound led me to checking out the late 70's albums from Whitesnake. Much to my surprise, I loved them, and now I need them on vinyl. I found their live album from 1980, Live In The Heart Of The City, on eBay for $5.00...still sealed. Did not hesitate to pick it up. I'd resisted and avoided them for so long, but there is something about 70's Hard Rock that I've fallen in love with...or maybe I've just gotten old.
Posted by Mike at 10:41 PM 3 comments:

A Collection Of Answers

So after four months of single digit post numbers, I was looking forward to blogging like an addict, and getting some long overdue posts up in July. The month got off to a slow start with the July 4th holiday, and then my computer got hit hard with a virus. It shut my computer down for a week and I ended up having to clean everything off and rebuild. I'm going to have to work overtime if I want respectable post numbers this month. 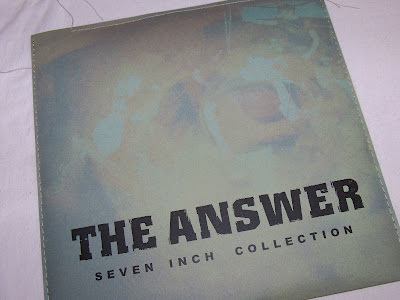 Recently, Dave Larson from Excursion Records posted on the REACT! messageboard that he had 10 copies of the Seven Inch Collection package that he had made up for the Rain Fest this year. There were 100 of these made, and it contains all three 7 inches from The Answer. 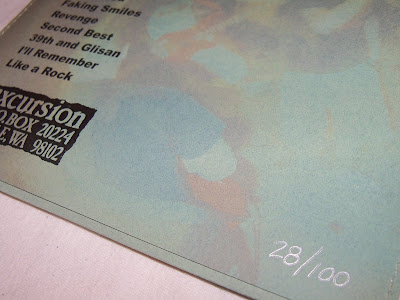 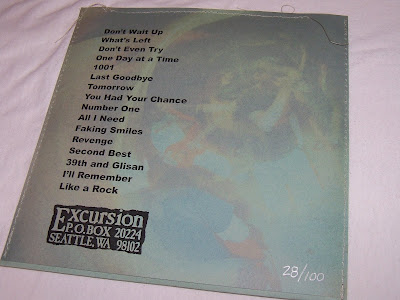 The records were packaged beautifully, but were completely stitched closed. The only way to find out which records were included was to cut the top stitch. 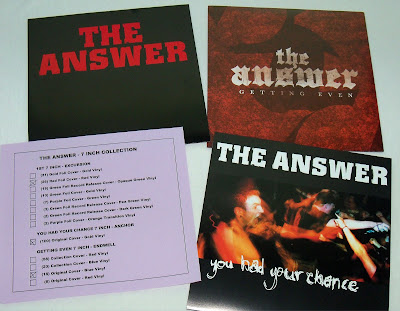 I know some people that would leave it stitched up, but I couldn't resist. I needed to know what pressings I received. 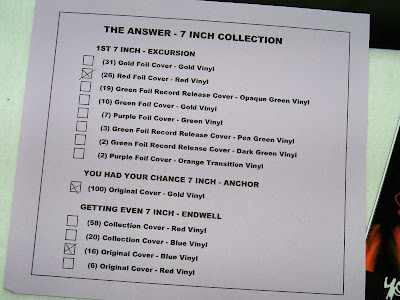 The 7 inch collection came with a check list to document how many of each pressing were included in the package and which ones you received. 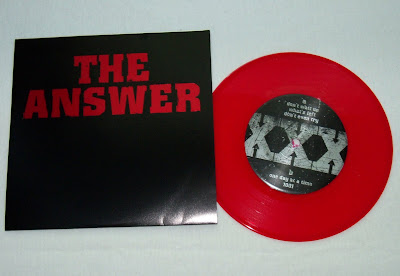 The first 7 inch, released on Excursion Records, and limited to 26 on red vinyl with the red foil cover for this package. I've never heard this 7 inch, so I was excited to check it out. 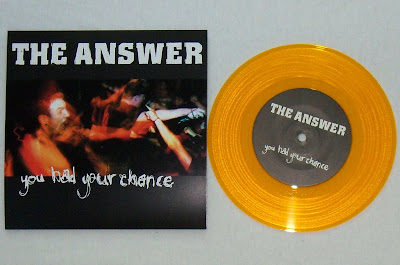 You Had Your Chance 7 inch, released on Anchor Records, and limited to 100 on gold for this collection. 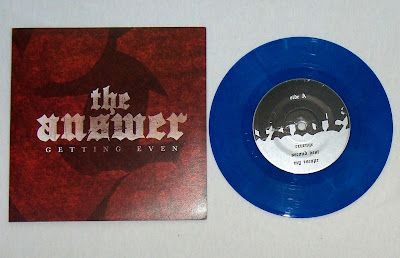 16 copies of the blue vinyl with the regular cover were included for the Getting Even 7 inch that was pressed on Endwell Records.
Posted by Mike at 12:21 PM 1 comment: