My Love Can Be Bought 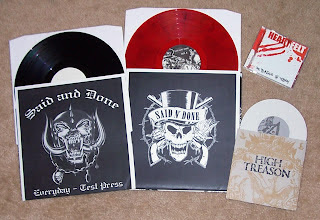 I love Shield Recordings! A while back, Rold had posted on his blog about Shield putting up a pre-order for the new Said and Done LP. Pre-order copies of the record were to come with a special sleeve, pressed on red and black "flamed" vinyl, and were limited to 50! I checked out a couple mp3's of the band, and liked what I heard so I emailed the guys at Shield to get a price for shipping to the States. I figured that while I was ordering overseas, I'll pick up a few other things at the same time and ordered the new High Treason 7 inch and the Heartfelt CD that I was missing from my collection. Gert-Jan from the label emailed me back with the pricing, apologizing for the $16 shipping charge. I was so charged up about getting the album, did I mention that it was limited to 50, that I wasn't concerned about the high price for shipping. When I got the package in the mail, I nearly wet my pants with excitement when I saw that Shield had included a test press of the Said and Done album along with the pre-order pressing. I was so excited that I even ran to show it to my wife...and since she has little to no interest in what records I'm getting, that should tell you how happy I was. The test press has a cool Motorhead rip-off sleeve, and is limited to 10...and mine was number 10. Much love and respect to Shield Recordings for adding this record to my colleciton. Also to note, the High Treason 7 inch came on white vinyl and was limited to 525 copies, and the Heartfelt CD....well, no one really keeps track of how many CD's were pressed, so Shield needs to get the Heartfelt stuff pressed on vinyl. 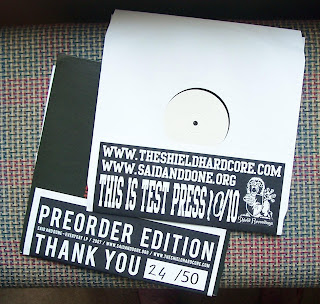 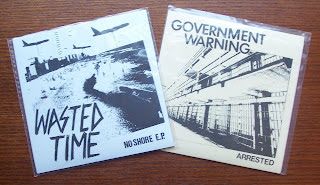 I picked up a couple of new 7 inches from Grave Mistake Records. Both Government Warning and Wasted Time had something new to give. The Government Warning record starts off with the title track, Arrested, and the lyrics "God bless the USA, and only the USA." scream off the vinyl with a classic Born Against style. Wasted Time was new to me, but I decided to take a chance on them. Wow, this is easily going to be one of my favorite 7 inches of 2007. They take their name from a Negative FX song and they play an intense style of hardcore not unlike that band, or Last Rights, or early Slapshot (basically any early 80's hardcore band that Choke was involved with). I had placed my order with Grave Mistake with hopes of possibly picking up one of the few copies of colored vinyl left in stock for Government Warning, but they sold out so quickly that I only got the black vinyl for both records.
Posted by Mike at 9:09 PM 3 comments:

The More Things Change, The More They Stay The Same 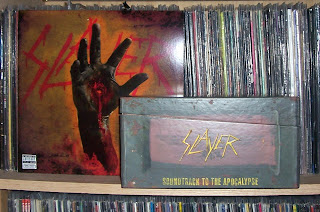 Today is my birthday. I am now 37 years old. Fuck, that sounds old, but you know what, I don't feel old, and sometimes I wonder if I have anything in common with other people that are my age. I enjoy what I do for my job, but I could give a shit about my "career". I'd rather chill with family, spend hours going through my record collection, or hang out with friends playing video games, than waste my time and mind at happy hour with drones who's sole existence seems to revolve around when they can drink. I love my life, and live it the way that makes sense to me. I remember when I was around 17 years old and was really getting into Thrash Metal...listening to a lot of Metallica, Slayer, Testament, and Overkill. A co-worker of mine at McDonalds told me that soon I would grow out of that style of music...like I was going to enter adulthood and toss out my Heavy Metal tapes and tune into some radio station playing "the hits of yesterday and today". I don't know if that is how it works for some people, but it sure as Hell wasn't how it was going to work for me. Music makes up a large part of who I am. As an awkward teenager with zero self-confidence, it was a safe haven. It was where I could go and not concern myself with how I measured up against others.
So here I am 20 years later, 37 years old and finding myself getting a charge out of buying the newest Slayer release on vinyl. This is a re-issue of their Christ Illusion album, which was released on my birthday last year. Apparently they had another song, Final Six, that didn't get finished during the recording session because Tom Araya got sick and couldn't finish the vocals on time. After the album was released, they finished up the song and re-released it to include the extra song. In addition to the new song, there is an alternate version of the song Black Serenade, and a different album cover. Saw it on vinyl for $15, so I picked it up. The other Slayer item that I picked up this week was the Soundtrack to the Apocalypse box set. I got $60 in gift certificates for my birthday, and saw it as the perfect opportunity to pick this up as well. 4 CD's and a DVD, a really cool and detailed book about their existence, plus a couple of other trinkets (a banner and a laminated pass). Very cool, and since it is limited, I was happy to get a copy (unlike that Iron Maiden box set that I missed out on a few years ago). So, yeah, 37 years old and listening to Slayer...yeah, maybe I'll outgrow this music someday...right.
Posted by Mike at 8:11 PM 4 comments: