Gearin' Up For Gettin' Down 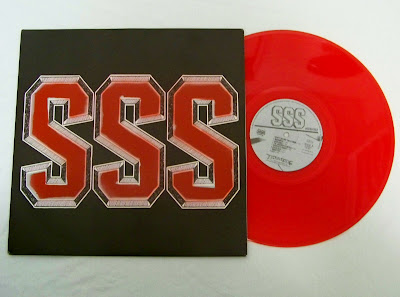 SSS are so cool...I feel bad for you if you haven't heard them. Hands down the best "thrash revival" band around today. The band is so good that even hardcore kids should be losing their shit over this band. I recently won this pressing of their first album on eBay. Red vinyl with the SSS logo spray painted in red as well. On the back, written in gold lettering, is a message from the singer, Foxy....okay it isn't so much a message, as it is a listing of show titles from the season 6 DVD of The Waltons...apparently the dude is a huge fan, as the list ends with the note, "Waltons rips it up!". As it turns out, the eBay seller for this record was Foxy himself, which was very cool. We exchanged a few emails, and the guy has a list of other SSS pressings that he is willing to part with, so you can expect to see more SSS records here in the near future.
Since Foxy also runs Thrashgig, which pressed the Blackspot pressing of the Walk The Plank album, I mentioned to him that I'm still waiting to receive the copy that I ordered from Ian Leck. I paid Lecky many months ago, and I'm still waiting for it to arrive! Foxy said that he also had a copy that he would sell to me. If Ian ever responds to my emails, I may need to get my money back and just buy it from Foxy. 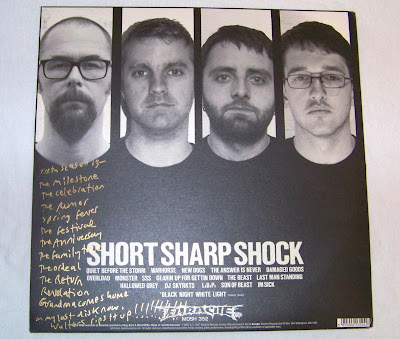 Headed For The Adult Crash 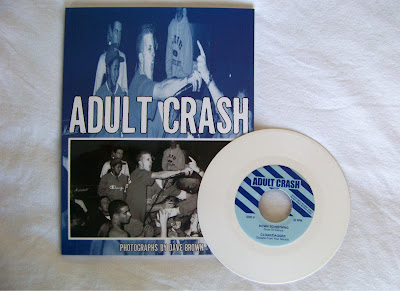 Adult Crash is a book of photographs from Dave Brown, who runs Vicious Circle Records. Even though some of the pictures are a little redundant (there are 4 or 5 of Four Walls Falling from the same show), there are a lot of cool bands are captured in this book. The writing is sparse, but includes different pieces written by various people from the scene (from Sweet Pete to John Joseph) about their thoughts on growing older in the hardcore scene. The selling point for me on this was the 7 inch that was included. Pressed on white, blue and black vinyl, I got the more limited of the three (154 pressed on white). The record features cover songs from Down To Nothing (Four Walls Falling), Cloak/Dagger (Warzone), Kill Your Idols (Token Entry), and Slumlords (Gut Instinct). Nicely done.
While shopping at Six Feet Under Records, I also decided to pick up the Different Needs E.P. from Regulations. I was thinking this was new, but to my surprise it was released on Havoc Records back in 2007. Goddamn, time flies. Regulations play some awesome, snotty punk rock, and this 7 inch delivers. Great stuff. 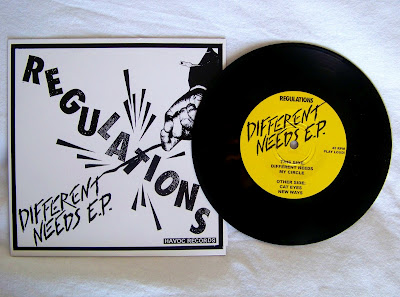 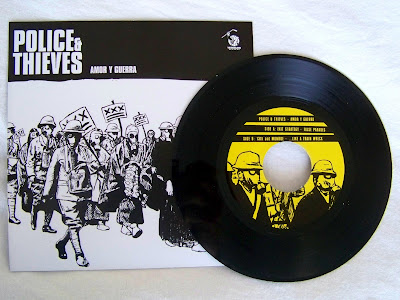 Back when Youngblood Records released the Police & Thieves 7", I was feeling way too broke to place my order. Months later when the label finally released the CD, and packaged it with the bands first two 7 inches, I decided it was finally time to place my order. Since I waited too long on the vinyl, I was left with the regular black vinyl pressing for the Amor Y Guerra record. I'm disappointed that I missed the more limited pressings for this record, because I'm really liking this band. This is the same singer as Worn Thin, so you can't help but compare the two, but Police and Thieves also has a strong Verbal Assault and Dag Nasty influence as well. Great stuff.

The first 7 inch, on Higher Conscience Records is pressed on yellow vinyl, but I have no idea how many were pressed for this record. This record was originally released back in 2006, and it just proves how out of touch I can be, because I had never heard of this band prior to the Youngblood release, two years later. 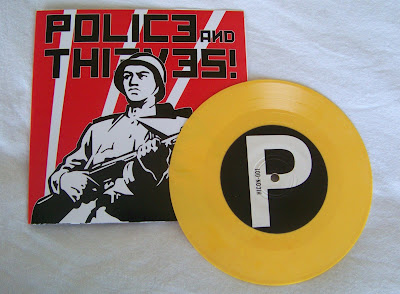 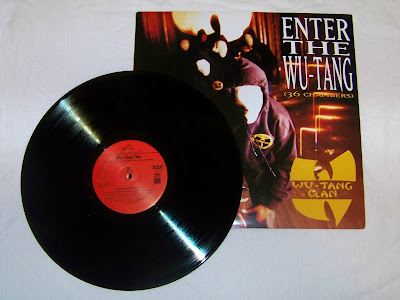 Word is born, baby. It has been a while since I really gave two shits about hip hop, as all my musical attention has been focused on three areas...hardcore, metal, and 70's rock. Growing up, I owned a few rap albums from Public Enemy and KRS-One, but it wasn't until I started hanging out with Rob that I really became interested in the style, and even then, it took some time for me to warm up to it. I remember hanging out at his house and playing Magic the Gathering while he would play all kinds of hip hop. Man, I hated it at first...completely closing my mind to songs about sippin' on 40's and smokin' blunts. Slowly, I started to get into the style...first with Beastie Boys, and rappers with a positive message like Jurassic 5 and Brother Ali, and then I became a fiend downloading hip hop albums left and right. Well, that love affair ended with my introduction to 70's rock, and I starting weeding through all those downloaded CD's, realizing that I downloaded a ton of crap...but still holding on to a few that became classics.
One of those groups that I never got into was the Wu-Tang Clan. Rob was a huge fan, and when they had a show scheduled for northern Maine on January 3rd, he wanted to go. We went to see Ghostface Killah a few years ago, and I wasn't impressed, but he offered to buy my ticket, so I figured what the hell, I'd go with him to the Wu. To my surprise the show was a ton of fun. Fights were breaking out all over the place. It was insane, but I guess that is what you can expect when you get a bunch of drunk, testosterone filled, white boys trying to prove something at a hip hop show. If this was a hardcore show, I would have been depressed at all the schism, but here at a Wu-Tang show, it was fun to watch these meatheads go at it. By the end of the show, security had stopped trying to bust up all the fights, and just let people go at it. I really didn't expect to have such a good time, but I got right up to the front and bounced to the beats...good times. A few days after the concert, I dug out the burned CD that I had for 36 Chambers, and again was surprised to find how fun this album is. A few weeks later, I got to work and found a box in my chair with the vinyl for this classic album...a thank you present from Rob for going to the show with him. My first, and possibly only, hip hop vinyl for the collection. Thanks, man.
Posted by Mike at 8:10 AM 1 comment: 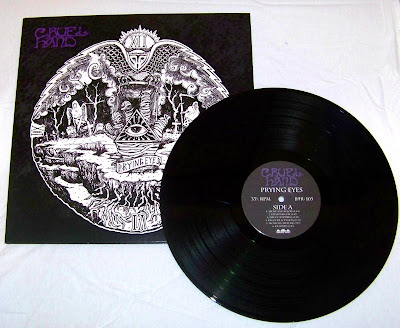 Back when I ordered the new Ceremony album, I also placed an order with Bridge Nine for the new Cruel Hand album, Prying Eyes. To my surprise, they still had the most limited pressing of the vinyl (200 pressed on black). I consider myself lucky on this one, because this album is incredible, and should have sold out long before I got there. If I was more familiar with it when I put together my year-end review, this may have made my top 10 for 2008. Prying Eyes is a huge step up from 2007's Without A Pulse.
Once again, the Bridge Nine mailorder crew went the extra mile with my order. A while back, they really helped me out when the system didn't fully complete processing my order, and by the time we realized it, the last show pressing of Champion's Promises Kept had sold out. They didn't need to do it, but they still managed to pull out a copy for Rob and myself. This time, Matt included a vegan recipe for corn beef hash. I have yet to try it, but it sure sounds good.

Cook the diced onion in 1 tbs oil until browned and a little caramelized. Next, mash up the beans with a fork in a bowl, and pour into the onion mixture, adding the other tbs of oil. Mix in the soy sauce, tahini, and potato and cook for about 10 minutes until the entire thing is crispy and delicious.