2016 is on it's way out, and while many people are going to remember it for the shitty year that it was, I'm giving it a gold star in regards to its impact to my record collection.

I know that I've talked a lot in the past years about focusing my attention, and concentrating more on records that I consider classics. While buying 12 copies of the new Orchid album in 2013 was a lot of fun, a few years down the line, it feels like a waste when I'm still missing hundreds of records in the collection. Looking back at the list of records I bought this past year, I feel really good about the direction that my buying habits took me...a fine balance between hunting down old records, and checking out some new releases. 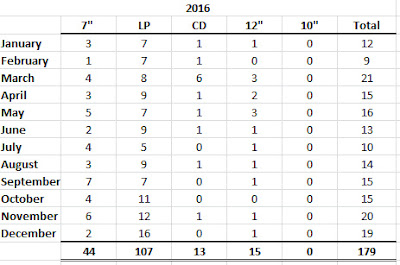 Somehow my post count is up from last year, but my total number of records hit an all time low at 179. Damn! I was so shocked, I had to check and double check those numbers. Compared to previous years, the numbers just don't seem possible...like I've missed a month or something in my calculations. Nope. I guess that is just the end result of no longer trying to keep up with every new pressing from every Hardcore band. 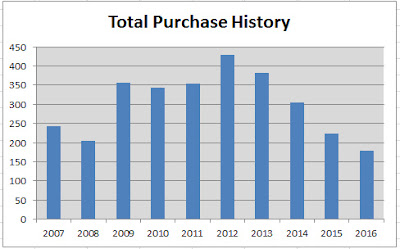 The numbers continue to drop, but 2016 was more about quality, and not quantity. Even though I purchased less records this past year, when I compare dollar totals, I find that I didn't really spend that much less. So I'm buying less records...but they are more expensive. When the end result is that I have original pressings from Agnostic Front, Negative FX, Sex Pistols and The Heartbreakers, I can live with buying less records each year.

Okay...that brings us to the top 5 records that I bought this past year. 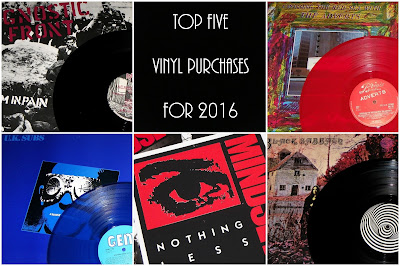 I'm going to pat myself on the back here, and say that I bought a lot of great fucking records in 2016. I try to be humble, but we all know that these purchases make me better than you on some level. Suck on these, ya losers.

2. Agnostic Front 'Victim In Pain' Ratcage pressing - When I reorganized my record collection this year, and I saw the three Bridge Nine pressings for Victim In Pain one the shelves, I felt like a chump for still not owning an original pressing. While they were great for what they were, those reissues weren't cutting it for me anymore.

3. Mindset 'Nothing Less' RSD pressing - Mindset's swan song...with a special cover for Record Store Day...from a good dude that picked up a copy for me, so that I didn't have to spend crazy money to get one into my collection. Chris from over at Unwavering Spirit is one of the best.

4. UK Subs 'Another Kind Of Blue' original UK press on blue vinyl - I'd never heard the UK Subs prior to this year, and once I'd heard their debut album from '79, I was hooked. Once I found that there was an original pressing on blue vinyl, I knew that I needed a copy. They aren't very rare, but it still felt great to add one to the collection.

5. The Adverts 'Crossing The Red Sea' UK press on red vinyl - The Adverts were another early Punk band that I'd never heard before this year. I had a fever, and the only prescription was more late 70's Punk on colored vinyl. The tone was set with the UK Subs record, and even though the UK pressing on red vinyl for The Adverts was considerably more rare, and therefore expensive, I couldn't allow myself to go cheap. 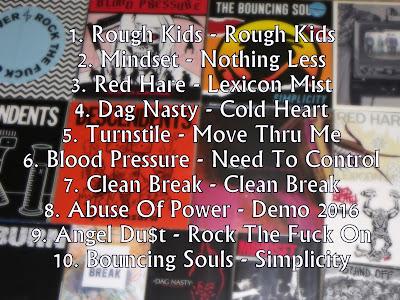 Yikes. I didn't buy many new Hardcore/Punk releases...I only picked up around 15 or so, but the ones that I did buy were great. Every once in a while, I'd feel guilty for neglecting some new Hardcore bands, and I'd check them out...but for the most part they failed to move me. What the hell did I miss this year? 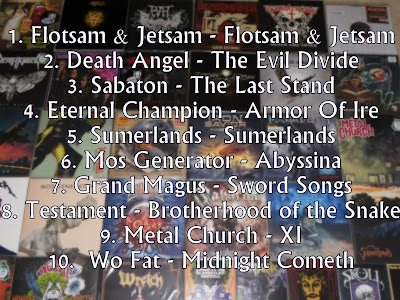 As we worked our way through the year, I felt kind of underwhelmed with Metal's newest offering. There were a few albums that I really liked, but overall, it seemed that things just didn't hold my attention. As I started blasting through the Metal playlist for 2016 to close out the year, and pulling records from the shelves to get the end of year money shot photo, things started clicking with me. Damn...I didn't even see it coming, but there some really good records that were released.

So there it is...my 2016 year end recap. Overall, I'm pretty happy with the end result. I've been doing this blog thing for nearly 11 years, so if you are still hanging around and digging the music, thanks for sticking around. If this is some kind of stand off, I guarantee that I've got more stamina for this nonsense than you do. Let's see if you've got another year in you.

Another year, another great end of year post. I always REALLY enjoy reading these posts. It's pretty much the best thing about the passing of another year!

Very interesting to see the graph of purchases and the shape it's taken, with the reduction every year since 2012. As you say, probably a sign that you're going for quality not quantity, but funny that you're going against the global trend.

Also interesting that you're still including CD's in your count of purchases. Still doesn't seem right to me, especially given you don't include them on here.

And the fact that you barely bought enough hardcore records to do a top 10... welcome to my annual dilemma. Haha!

Anyway, good read. Here's to another year of nonsense!