Another Kind Of Blues

For me, 2016 has been an amazing year for new music...and by new, I mean music that is well over 35 years old, but that I'm just getting around to hearing for the first time. 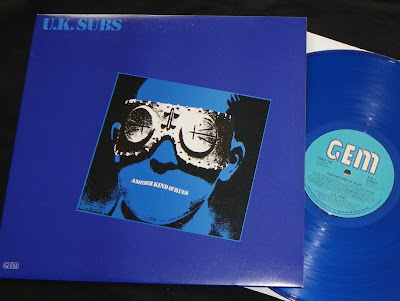 After uncovering a couple late 70's Punk albums recently, I became a fiend looking for a fix...hunting high and low for hidden gems that I'd never heard before. UK Subs were one of the bands whose name kept showing up on the early Punk lists that I was digging out from the internets.

Initially, I kept writing them off and ignoring them. I'm not sure why. I suppose I kept thinking of them as some kind of Oi! street punk band, and I wasn't interested in that sound. After seeing their name repeatedly thrown around, I finally broke down, and dug out a youtube video of their first album, Another Kind Of Blues. 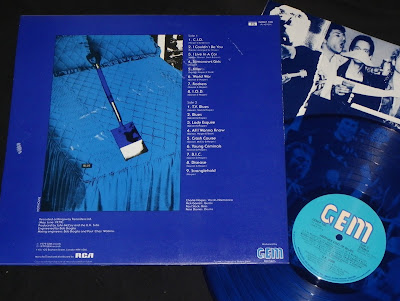 Say hello to my newest obsession. I couldn't get enough of it, and soon, the album had wormed it's way into my daily playlists. Reading up on the band, I found that there was a Punk wartime parody documentary, Punk Can Take It, and I even found a link for it on youtube to watch during my lunch break at work. The band obviously had my attention, and quickly climbed the list of records that I'd discovered and needed to buy.

The first 20,000 were pressed on blue vinyl, and finding one at a decent price from a US seller sealed the deal. It was mine. 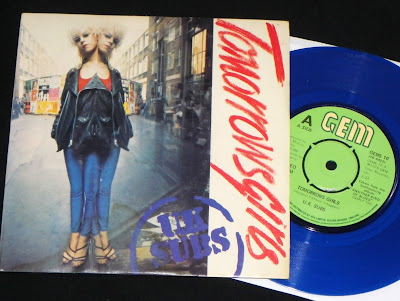 The initial download that I'd grabbed of Another Kind Of Blues included a live version of a song called Telephone Numbers. It was a ripper of a song, but I noticed that it wasn't on the original vinyl release. So where did it come from?

After a bit of research, I found that it was a B-side song to the Tomorrows Girls single. Okay...I obviously needed this as well. 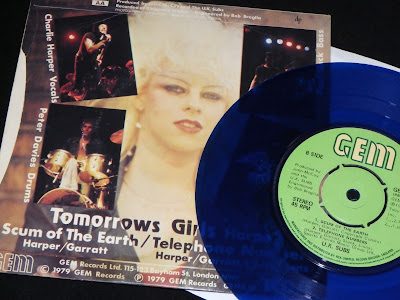 Both Telephone Numbers and Scum Of The Earth are essential UK Subs songs. As B-side exclusives, this single is mandatory. 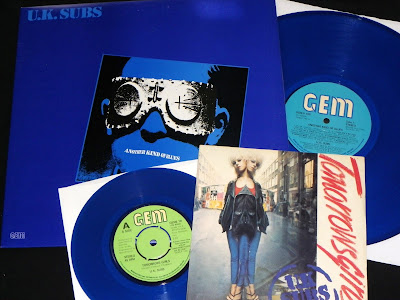 I love that both of these were pressed on blue vinyl. Such a good look for 1979.

I have that blue vinyl lp too - picked it up for a measly £1 about three years ago. Score!