Back in 2009, when Devotion released their first album, I didn't give it so much as a passing glance. Go It Alone had broken up, and Mark Palm was doing what I understood to be a more "mature" record. Fuck that noise. Without even hearing a note of it, I wrote it off. 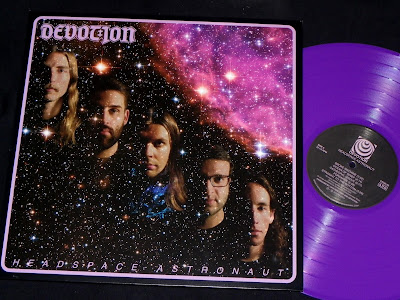 Seven years after the release of their debut, Devotion is back with their follow up LP, Headspace Astronaut...and to be honest, I was fully prepared to ignore this one as well. When Doug first brought it to my attention, I quickly dismissed him. I mean, come on, how was I supposed to take that cover art seriously. It was like a K-Mart photo session gone bad.

But Doug was interested in it, and had asked that if I was getting one, could I pick one up for him as well to save him some money on shipping to Canada. Since I'm a big fan of the Record Blog Brotherhood, I figured that I'd check the album out, because...hey, maybe there was a chance I'd like it, and I could help him out in the process. So I took the trip over to the bandcamp page to see if this was anything that I should bother with. 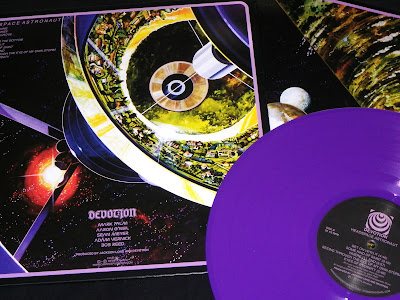 With Mark Palm at the mic, you can easily pick up on the Go It Alone connection, but Devotion have more in common with some fuzzed out Stoner band than they do with mid-00's Hardcore. After listening to a couple songs, and seeing the video for Ocean Of Grief, I was sold on it, and placed an order for two copies. Once again, paying attention to Doug pays off. If it wasn't for him, I would have otherwise missed out on this. Hmmmm...maybe I should check out that first Devotion record at some point.

The first album sounds much more like a Go It Alone album than this one does. It still has the same rock vibe that the new album has, but it sounds like it could have been a follow up to Histories at the same time. I'd definitely recommend it.

The lesson as always, you should always listen to what I say. i am amazing!

Seriously, this album is pretty great. Mark Palm has a good grasp on this type of music to go along with hardcore and metal.

Downloaded this and the first one too, which I'd never heard before. This new one is really good.
Where'd you buy it from?

Bought it from their bandcamp page linked in the post. Purple is now sold out.