Is there any band that is slower to get a new album out than Metallica. We were first teased about a new album in the works a couple of years ago, and then we got the Lords Of Summer 12 inch as a teaser for Black Friday 2014. Yes...two thousand fucking fourteen. At the time, it seemed like the album must be just around the corner. Two years later it finally drops. 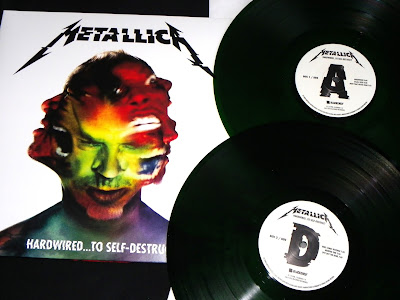 By the end of Summer, the Metallica machine started to build up steam...first releasing the Hardwired video, and then a month later they hit us with the Moth Into Flame single. Both songs sounded amazing, and I was really looking forward to the new album, even though the record cover may be one of the worst ever. When the band came around again a month later with Atlas, Rise, and it got a bunch of positive reviews, I was like "Fuck it. I'm not going to listen to this song.", and instead, I decide that I'll let the excitement and anticipation build until the record hits the stores. 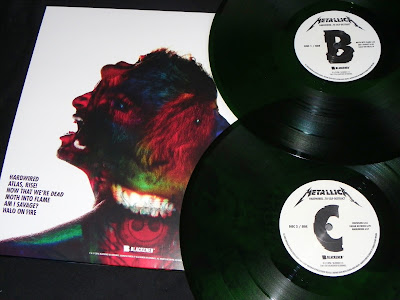 As soon as release day arrives, I've got the album queued up and ready to go. Four songs in and I'm loving it, but like most albums that exceed the hour and fifteen minute mark, it starts to feel a little bloated...my attention lags, and I start thinking there is some filler here that I can do without. Christ. I wish that the band was a bit more focused and maybe instead of waiting 8 years to release an album and shoving 80 minutes of music at your fans, perhaps it would be better to just release 40 minute albums every four years or so. So anyway, by the time I reach the end of the record, I feel like it's too much, and I have zero desire to slog through it again until a week later.

Okay...so my initial irritation has subsided a bit since that first listen, and the album as a whole has started to grow on me. I'm still disappointed with the Lemmy tribute song, but overall, the album is better than I first thought, and some of these song are damn good. 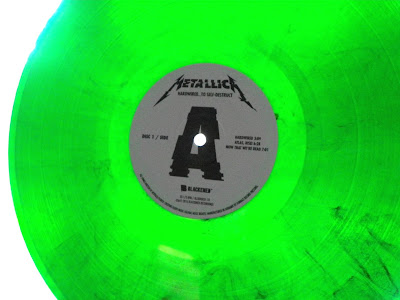 Green vinyl only available through the Metallica store, and limited to approximately 2,200 pieces.