For me, there is something endearing about those smaller, more unknown 80's Metal bands. Bands that slugged it out in clubs, recorded an album or two on some small independent label, and then gets buried by time and dust. Sure, they aren't going to come close to the top tier bands of the time, but if they were flying the Metal flag in the 80's, chances are that I'll be down with it. 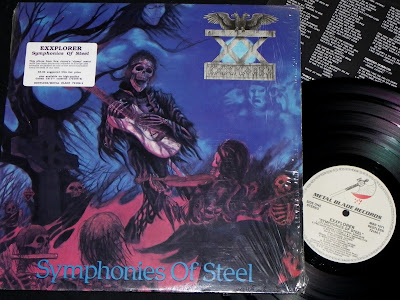 I'd downloaded the Symphonies Of Steel album about 10 years ago, but I'd really only listened to it a handful of times. Still...when I stumbled upon the Exxplorer LP in the used bins at Moody Lords, I didn't hesitate to add it my growing pile of records that I would be buying that day. The album isn't going to knock anyone on their ass, but this is still a good dose of traditional Metal. 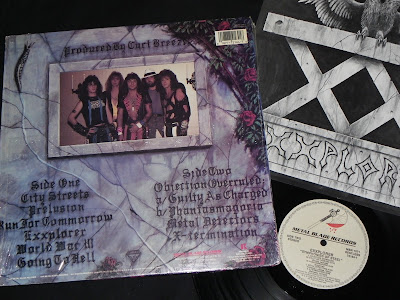 Symphonies Of Steel was originally released independently in '84, then received a reissue on the Black Dragon label out of France in '85, and then Metal Blade reissued it again in '86. Each pressing got new art for the album cover. I think the Metal Blade one looks the best.