When Iron Maiden reunited with Bruce Dickinson back in 1999, I don't think that I was even aware that Dickinson had even left the band. That's how out of touch I had become with Metal. Around that same time, I was starting to get the itch to see what was happening in Metal again, and started checking out all kinds of modern heavy bands. I don't think a single one of them stuck with me, but it did trigger me to go back and dust off some of those old Metal CDs that I grew up with and it kind of rekindled that spark. Soon, I was hitting whatever fileshare program was popular at the time, and downloading those albums that I'd missed during my 10 year Metal hibernation. Inevitably, I downloaded the newest Iron Maiden album, Brave New World. 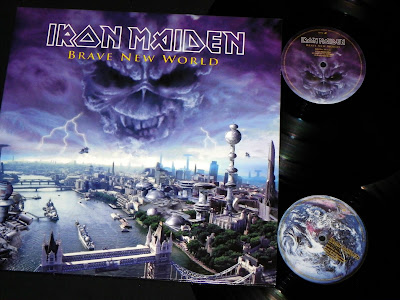 At the time, I was content with my free download, but over time, I figured that I liked the album enough that I could spend the $10 to pick up the actual CD. For years I was content with this, but as a couple of years passed, and I started to get deeper and deeper into record collecting, I found that I wanted Brave New World on vinyl as well. The going rate for this album in 2005/2006 was around $60, and that price was way too steep for me at the time, and I walked away. At that time, I found the price to be ridiculously high, and there was no way I was paying that. Of course, over the following years, the price continued to climb, and I wanted it more and more. Things came to a head a couple months ago, and even though the vinyl was fetching closer to a $150 to $200 price tag, I couldn't wait any longer. I needed a copy in my collection now.

I mentioned to Doug how I was getting ready to pull the trigger on this record, and he told me not to cheap out by going for the Black Friday Record Store Day pressing that was coming out. Wait. What? I had no idea what he was talking about. Apparently I was one of the few that was uninformed, because suddenly, Discogs was flooded with original pressings of Brave New World, as sellers were looking to cash in out of fear that the reissue would drive down the price of their records. With sellers still looking to cash in, I decided to save a few dollars, and get the black vinyl pressing on Black Friday. 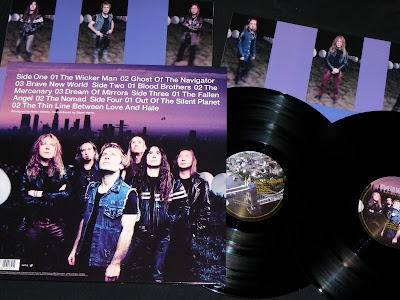 While as a general rule, I avoid Black Friday Record Store Day, I was going to have to make an exception in this case. With the record store only 5 minutes from my house, I was out the door at 7:45 the morning after Thanksgiving, so that I could be there when the records hit the floor at 8:00.

I still kind of what the picture disc first pressing, but you know, for now, I'm satisfied. Who knows, maybe that pricing will drop to a more reasonable price and I can pounce then.