I spent a bit of time over this past Fall out on the roads, racking up miles and making some progress in my goal to run 1,000 miles before the year's end (mission accomplished, by the way). I had a New Model Army album loaded up on my running playlist, and I found myself getting a charge whenever one of the songs came up in the shuffle. I really looked forward to having one of those songs give me a boost on the roads, and finally I just took all the New Model Army songs that I had on iTunes, and loaded them into my running playlist. There were a couple of the early NMA albums, that I wasn't really familiar with, and it was great to have them keep me company while pounding out the miles. 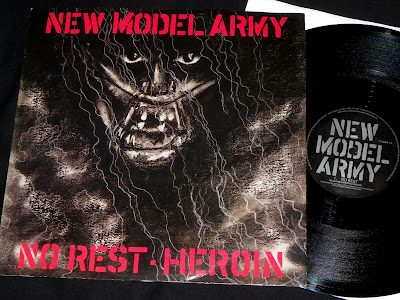 One of the songs that I didn't know that well, but really caught my ear, was the song No Rest. My New Model Army record collection is weak, and desperately needs attention, and after hearing that song a few times while out running, I figured that I really should finally track down the No Rest For The Wicked album on vinyl.

I didn't immediately find one in the condition, or at the price I wanted, and my attention wandered over to the No Rest single. 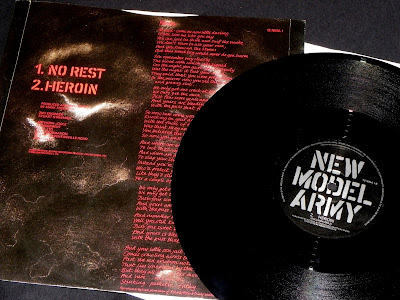 The big draw for the No Rest 12 inch single was the exclusive b-side song, Heroin. If you dig early New Model Army, this song is a must. 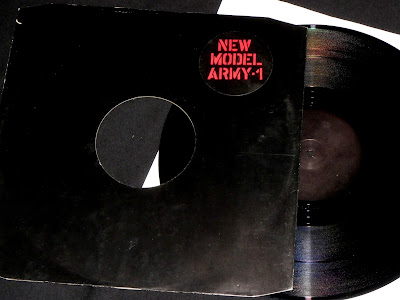 The No Rest single comes on a few different pressings. There is the 7 inch version (with different cover art), the regular 12 inch press, and then the double 12 inch single with the bonus record containing three live songs from '84. I wanted the most bang for my $3.75, so I grabbed the double 12 inch off eBay.