I don't pay much attention to Uncle Acid these days. Their albums are good, but not something that I return to very often, and it had me thinking that I might just let their next full length record pass me by. I've got other things that I'd rather spend my money on, so why chase this band when I listen to their new stuff a handful of times before shelving it? 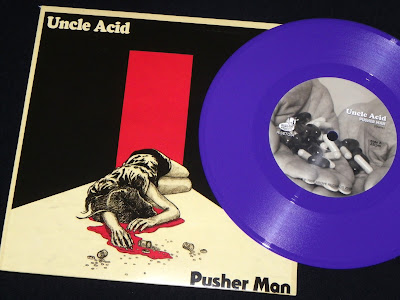 When Rise Above released the Pusher Man single, I promptly ignored it. The track was pulled from Uncle Acid's 2015 album, The Night Creeper, and while it is a pretty good song, the album, as a whole, didn't rate too high on my list. Therefore, I had no interest in chasing the single. 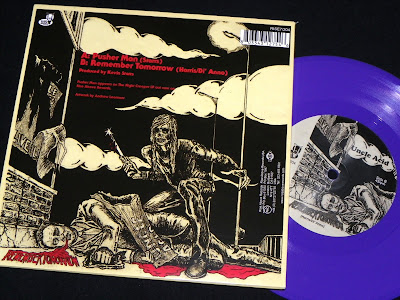 Then I saw that they covered Iron Maiden's Remember Tomorrow on the b-side. That I needed to hear.

Wow, this version is great, and Uncle Acid give the song a great creepy vibe. Buying the purple vinyl for the US pressing for Rise Above releases still feels like dirty hobo sex in the back of a burned out station wagon, but hey it only cost me a few dollars, and in the end the urge is satisfied.

Labels: Uncle Acid and the Deadbeats

I always miss out on these releases from Rise Above. Need to pay more attention to this.