Five years ago, Sandwell posted about a vinyl reissue that he picked up for the Return Of Martha Splatterhead LP. I'd owned the Combat cassette for this as a kid, but to be honest, with the tape buried in the back of my closet for the past 20+ years, I'd completely forgotten all about the band. Seeing Sandwell's post was the spark. I quickly downloaded the album, and then proceeded to obsess about it for the next year and a half. 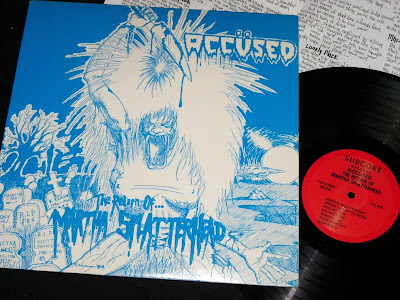 This album blew me way...it was raw, frantic, and packed with a ton of attitude...and I loved it ten times more now than when I first heard it in the late 80's. I couldn't believe how much I liked it, and I knew I needed to get my hands on a vinyl copy.

Return Of Martha Splatterhead has seen a number of different pressings over the years, and three different versions of cover art. While Sandwell's reissue looked pretty cool, I convinced myself that only an original Subcore Records pressing would satisfy me...partly because until I'd started researching the history of this record, I'd never seen the artwork used for the first pressing. The original art just seemed to fit the album the best...and while I like the artwork used on the Combat Records reissue, it just seems too slick for the rough and crude sound contained within. 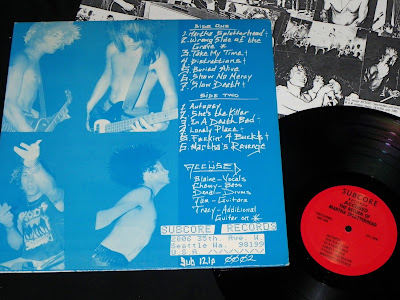 As fate would have it, here we are, five years to the day of seeing Sandwell's post, and I've finally added a Subcore pressing to the collection.

Cool. You need to hunt down the second lp now. That's even better.