Days Of The Pink Owl

There are some records that a reissue just won't cut it. Anything else just feels like a pale imitation. It's got to be the real deal. 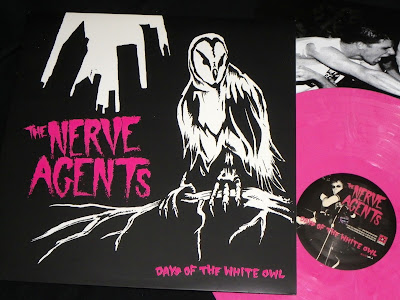 Eric Ozenne's previous bands, Unit Pride and Redemption '87, were solid gold, and he didn't disappoint with The Nerve Agents. In the early 2000's, The Nerve Agents were one of my favorites...hell, they are probably my favorite Eric O band ever. Since I was late to the record collecting game, I missed out on the original pressing for their albums on REV.

I grabbed the Record Store Day pressing that REV did for Days Of The White Owl back in 2013 because it was convenient. I knew that the original pressing on pink was the way to go, but the reissue was just too easy, so I grabbed it. It was just a place holder to get the vinyl on the shelf. 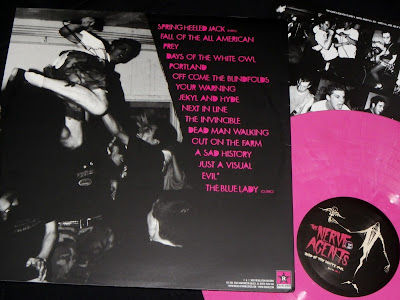 At the end of 2016, my self control slipped a little, and I found myself unable to stop from clicking "Add To Cart" on Discogs with no regard for anything or anyone. "Okay, I need to calm down on my record spending...oh shit, it would be great to own this one...hey, there is a US seller that has one available...fuck, I've bought another one.". No regrets on buying this pink vinyl copy of Days Of The White Owl though, because that shit looks great. 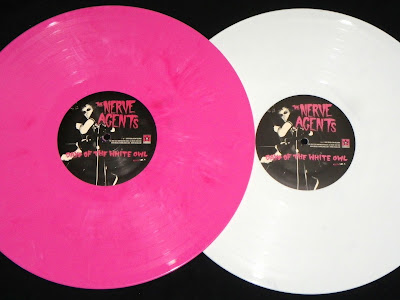 Good look with the pink and white. 338 pressed on pink, and 774 pressed on white. Now I'm just missing the blue vinyl. If REV promises not to follow up with five more pressings, I might have to get that one as well.

Great pick up. I still only have the represses. Will have to pick this up eventually.

I had a spare of this when it came out. Held it for a few months and then traded it to Robby Redcheeks for a red vinyl copy of the first American Nightmare 7". The things I remember eh?