While I was picking up the new pressing for the Red Hare 7 inch, it was recommended that I grab the new colored vinyl for the S.O.A. demo as well. Since I'm sometimes easily influenced, and have an inexplicable aversion to buying a single record when purchasing from an online store, I took the bait. 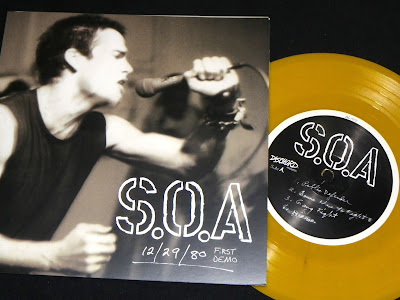 I'm generally not interested in multiple recordings of the same songs...so if a band's demo songs end up on their first album, I'm generally not going to spend much time with that demo. Over the past few years, Dischord has released a number of old demos on vinyl, and I've ignored them all. If I hadn't been in their webstore for the Red Hare record, I probably would have passed by the S.O.A. demo as well. On a whim, and because I wanted to beef up my cart, I grabbed a copy. 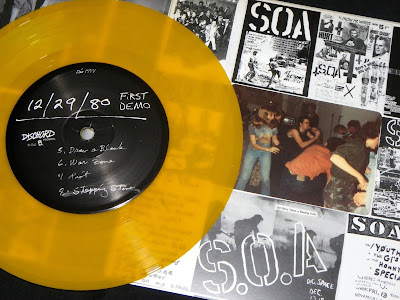 This S.O.A. demo is damn good. Great packaging, and killer songs. I'm glad I picked this up, and while the yellow vinyl probably looks best with the cover, now I'm kind of interested in the red and blue vinyl pressings of this. It also peaks my interest to possibly check out the string of Dischord demos that I've ignored to this point.