A couple years ago, I was kicked in the ass by Slade's live album from '72. Man, that thing is wild, and could quite possibly be one of my favorite live records ever. I love that record, and I eventually made the move to check out their studio work, starting with Slayed? from the same year as Slade Alive. 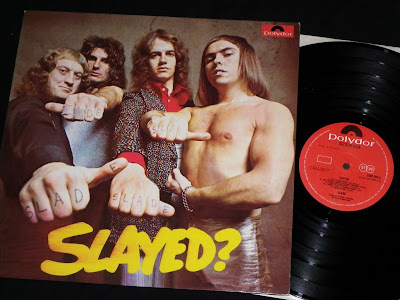 Obviously, the studio recordings for Slade's second album aren't as loose and wild as the songs from that live performance, but goddamn, Noddy Holder's voice still has that grit that I love. It is amazing that it has taken me this long to finally check out this band...I think that the connection to Quiet Riot (the original version of Mama Weer All Crazee Now is on this record), and the fact that Slade are often referred to as a "glam band"...well, combined, those two things were enough to steer me away from the band, even as I went deeper and deeper into a 70's rock hole. I'm glad that I finally took the chance on the band, because this is some good shit. 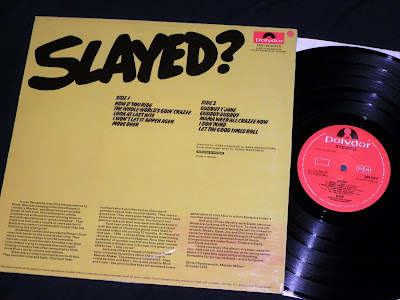 I'm not sure why it was important for me to get the UK pressing for this one, but that was the way that I had to go. I picked up the Slade Alive on the original UK pressing, so I had to do the same for Slayed. Don't ask me to justify it. It is what it is. When I was picking up a couple of other records from a UK seller last August, and saw they had a copy of Slayed in amazing condition, it seemed like the right time to add it to the cart as well.