Back in September, I was itching to do a record challenge on Instagram. I had an urge to dive in deep to my 7 inch collection, which sometimes gets neglected, and was looking to represent in a September Seven Inch challenge...however, I didn't see that there was any organized challenge happening. Well fuck it...I decided to just do my own thing and do a kind of "thirty years of seven inches" challenge and post a record from each year...starting with 2018 for day one, and then work my way back 30 years to the end of the month. 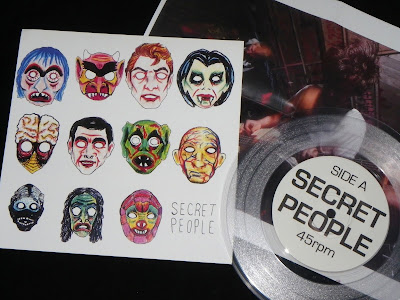 When I got to day 9, and was posting for 2010, I pulled my copy of the Secret People 7 inch. I'd forgotten about how much I liked that record, and it was a blast to spin it again...but posting the common black vinyl pressing, felt kind of weak, so immediately after posting it, I was on Discogs checking the pressing info.

At one point in the history of record collecting blogs, there was a dude named Kyle that I followed for a while. When I was looking for the clear vinyl pressing of the Secret People record, I discovered Kyle on Discogs, and since he had a copy available for cheap, I figured that I'd drop him a line to see if he was down to make some kind of deal direct, cutting Discogs out of it. It all worked out, and soon I was sending him a payment for a few records he was looking to sell for cheap. 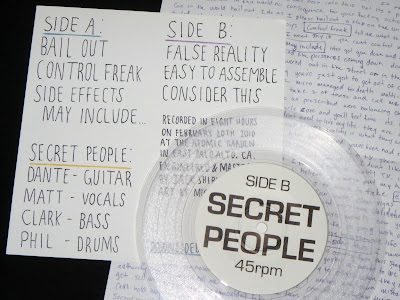