I've spent the past two months under pressure to get all the 2018 new releases posted to the blog before we closed out the year, so it feels good to have that behind me, and to get back to those older records that get me fired up over collecting.

Last year, I started off my blog posts deep in a New Wave Of British Heavy Metal mindset. I was obsessing over it at the time, and I had big plans to chase a bunch of those records throughout 2018. I picked up some big time heavy hitters with Wichfinder General, Venom, and Blitzkrieg, but after a couple of months I got sidetracked and started focusing on other stuff. I've been itching to get back to immersing myself in the NWOBHM, and one of my goals for this year is fill some more crucial holes in the collection. 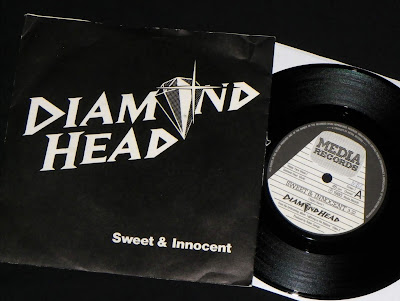 At some point this past summer, I stumbled upon a video of Diamond Head performing a song called Streets Of Gold on the BBC. All that I'm really familiar with when it comes to Diamond Head is their Lightning To The Nations album, and I thought that covered all their early material. Discovering Streets Of Gold proved that I'm still an amateur when it comes to the NWOBHM. Apparently I had completely missed a couple of the early Diamond Head singles, and downloading those songs instantly put them in heavy rotation for months. It triggered an itch to grab one of those early 7 inches, and I quickly hunted one down. 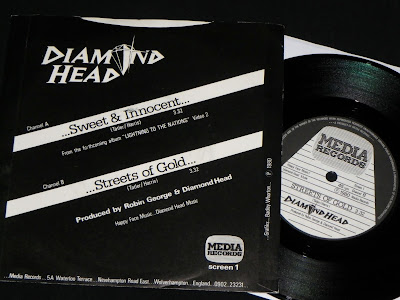 Adding the Sweet & Innocent 7 inch to the collection feels important. I don't know if it is because I've been spending so much time with new 2018 releases, or if it is because a few months prior, I didn't know that this even existed, but picking up this record feels like a preservation of forgotten history.