Witness To A Vinyl Pressing

The one record that I wanted for Black Friday Record Store Day, and basically the only reason that I bothered to leave the house that morning, was the Only Living Witness album. Needless to say, I was disappointed to find that my local store did not have it in stock when I got there that morning. In a panic, I thought that it had sold out and that I'd missed the opportunity, but in the end it just appeared to have been delayed. A couple weeks later, after checking online daily for the Bull Moose inventory, I could see the record was finally listed in stock, and I rushed out to grab a copy. 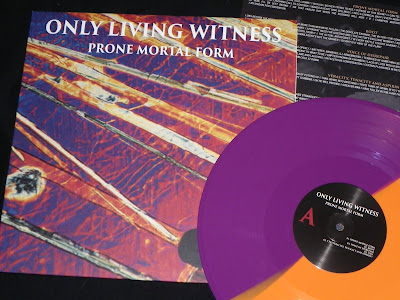 Originally released back in 1993, the Prone Mortal Form album from Only Living Witness was only available on CD...and then it was bundled with their second album, Innocents, in 2008, as a double LP package. While I really liked the band's first 7 inch, honestly, I never really bothered with anything after that. I don't think that I even bothered listening to Prone Mortal Form until I downloaded a copy around 2009, and even then, I didn't spend much time with it. Still, a couple years back, I absolutely fell in love with the Miltown record, and since Jonah sings for both bands, I figured that maybe it was time to revisit that first Only Living Witness album. 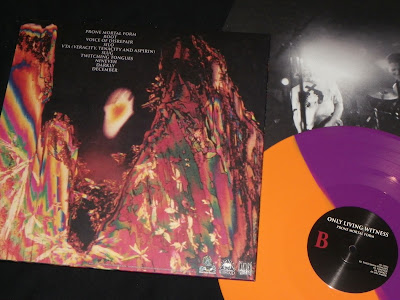 Yeah, this is a really good album, and at times I really get that vibe that Jonah was putting out a few later with Miltown. I'm really happy to finally have a copy of this.

800 pressed on this orange and purple split colored vinyl.

I think this is where I first read that this band had the singer of Miltown in. I meant to check them out but time passed and I forgot. Then saw someone post something this week that reminded me. But yeah... it's good.