Live From the Astroturf

Sometimes Record Store Day can surprise me. Yes, there can be a lot of garbage that hits the racks on this day, but every once in a while, I unexpectedly find myself excited for one of the RSD releases. I had reviewed the list of Record Store Day releases for Black Friday, and while there were a couple of records that I motivated me to get to the store when the doors opened at 9:00 that morning, the live Alice Cooper record was not on that list. 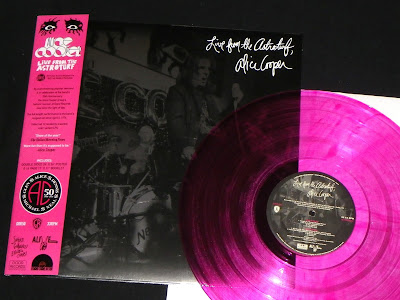 I headed to the store early on Black Friday because I did not want to miss out on the vinyl pressing of the Only Living Witness album, Prone Mortal Form. This was the one RSD record that I wanted, so I was really disappointed when I got to the store and found that they did not have a single copy in the rack.

In my search through the bins, desperately hoping that maybe I'd just overlooked it, I spotted the new Alice Cooper album, Live From The Astroturf. I wasn't planning on buying this, but coming up short with the Only Living Witness left me feeling incomplete, so on a whim, I grabbed this to fill the emptiness in my heart....plus that reflective silver foil cover, with the pink OBI style strip, and title font that's a throw back to the Love It To Death album, it all looked so damn good, and it was too much to resist. 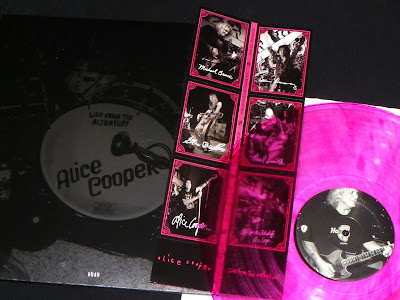 This live set was recorded back in 2015, when Alice Cooper made a "surprise" appearance at book signing for original bass player, Dennis Dunaway. Original guitarist, Michael Bruce, and drummer Neal Smith were there with Dunaway and had planned a short live set of classics from their time with the Alice Cooper Band, but shit went to the next level when Alice showed up and joined his old bandmates on the stage. This was absolutely historic, and thankfully the entire set was captured on tape, and is finally seeing the light of day with this vinyl release. 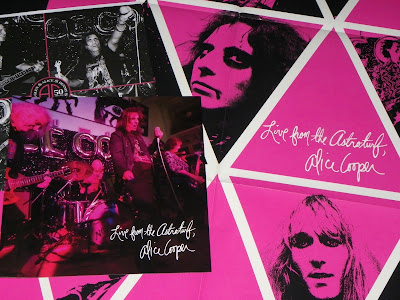 I was happy to buy a copy of this, but as soon as I started to open the shrink wrap and go through all the packaging for this record, I started to appreciate it more and more. While the price tag was a little high, it was well worth it for the absolute quality of the packaging and all the extras. Along with the OBI strip that has trading cards printed on the flipside, there is a giant double sided poster and a nice booklet that includes some writing and plenty of photos...plus, that translucent pink vinyl is fucking beautiful. 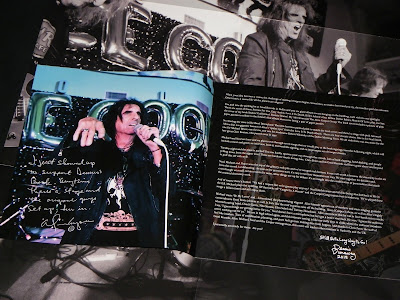 Absolutely amazing package. Limited to 3,000 and foil stamp numbered on the back cover.