Strike One And Two Of The Beast

Trevor William Church has been a man on a mission. In addition to the two records that he released this year with his band Haunt, the man cranked out 32 songs, spread over eight EPs for his band, Beastmaker. 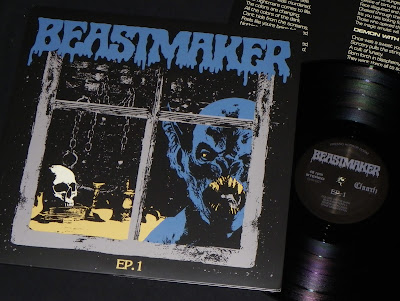 Originally released only on Bandcamp over the summer this year, with each EP being priced at a dollar, it was too much Beastmaker for me to take in all at once. While I did download all eight EPs, I only loaded half of them to iTunes. I mean I like Beastmaker, but come on, 32 songs at once was going to be overkill.

The songs themselves are cool little slices of doom. Nothing mind blowing, or drawing me back for repeat listens, but they are still pretty cool. 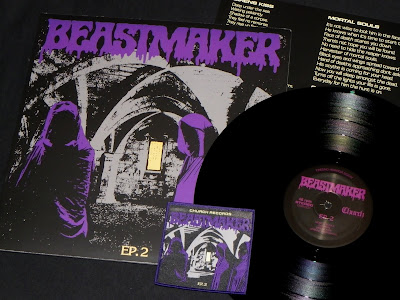 The best part about these EPs is the artwork. Those covers look amazing, and I'd probably buy them for that alone. So when Trevor took it upon himself to press the first two EPs, and combine them on a 12 inch record, I jumped in to grab one.