These days, I do not expect to get very excited over buying live albums, and most of the time they are easy to just ignore. When I heard that there was a new live Anthrax album up for preorder over at No Remorse Records out of Greece, you would have thought that I would have just shrugged my shoulders in indifference and walked away...yet, I was curious to see which tour this Chile On Hell live album was from, so I thought that I'd give it a little look. 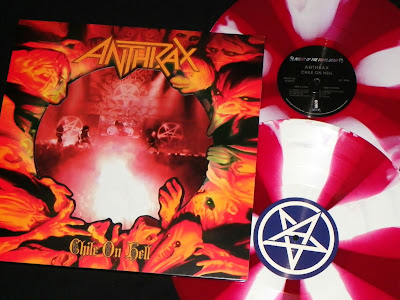 I wasn't aware, but apparently Chile On Hell was originally released on Bluray and DVD back in 2014, capturing the band during their Worship Music/Anthems tour. I had been underwhelmed with the Worship Music album, and never cared about the Anthems cover album, but I was kind of interested to hear the "new" songs live...and once I saw that Night Of The Vinyl Dead was releasing this for the first time on vinyl, I immediately placed my order with little thought paid to the $60 price tag it was going to cost for the album and overseas shipping. 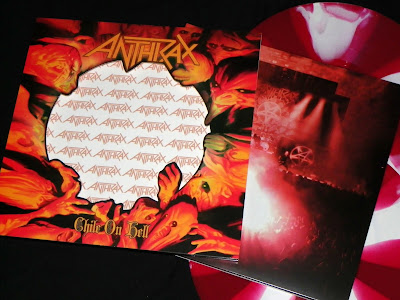 I'm a huge fan of the Night Of The Vinyl Dead label, and they never fail to impress me with the quality of packaging for the records they press. The NOTVD releases are usually unique and limited, and in most cases, you better move quick if you want one...or risk paying top dollar off Discogs or eBay down the road. The two Dio albums that NOTVD did carry ridiculous price tags these days, and it is going to cost me stupid money for the Magica record when I finally make a move for one.

So even though I knew the price paid now was going to be a bit high, I didn't want to risk trying to grab it later, and as soon as it arrived, I knew that I'd made the right choice. 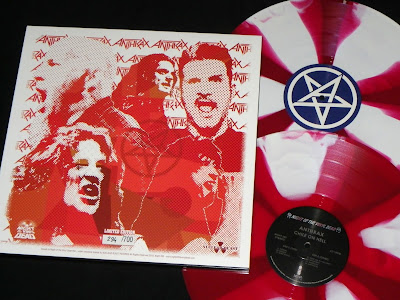 With a nice gatefold sleeve, packaged in a die-cut slipcase cover, this thing looks gorgeous...even the colored vinyl looks great. You can tell that this label puts a lot of care into what they do. Impressive. 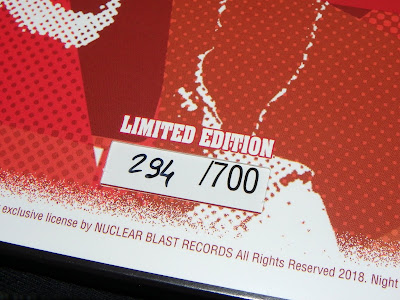 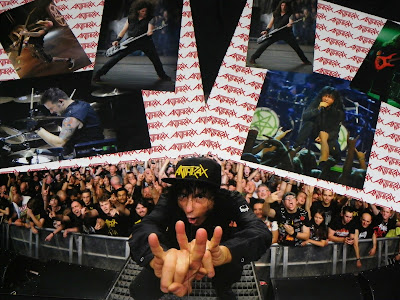 The album itself is pretty cool, with a number of Anthrax classics...although there is absolutely zero reason for the band to play I'm The Man live ever again...it was funny back in 1987, but seriously, let it go...and while we are at it, can we talk about dropping Antisocial from the set as well. Still, these two songs aside, this is a solid live album, and it is cool to hear some of the newer songs along side older classics that I was excited to see listed here, like In My World and Medusa. Solid.