Last Heard From Seger In '67

A couple of years ago, my friend Jeff purchased some Michigan garage rock comp that he'd found, and discovered some songs from Bob Seger back in '66 and '67. I'm a huge fan of early Seger, so I was thrilled to hear those old, raw tunes. I wasn't interested in that double album comp that Jeff had, but I still wanted those songs on vinyl, so I hit Discogs to find out what the story was. It looked like my only options were some old original 45's, but they weren't originally released with picture sleeves, so I wasn't too interested...and then there was a bootleg LP that collected all those old songs, but since it was an unofficial release, it wasn't available on Discogs. 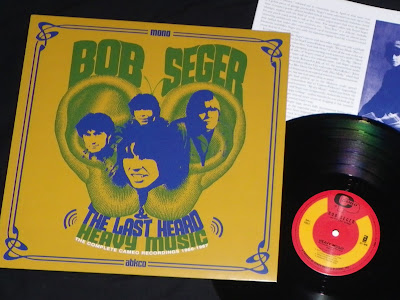 A couple weeks back I was messing around online, and discovered that all the Bob Seger and the Last Heard material was recently released on the Heavy Music compilation. Perfect timing! I checked my local store, and they had it in stock, so I quickly snatched it up. This is some cool shit. The songs are just what I'm looking for when I want some dirty late 60's rock, and the packaging gives a full history of the band. Great stuff.