While talking about Cast Iron Hike with Marcus, he asked if I was familiar with a band called Miltown. At first I was confused, and I was mixing them up with some pop punk band called Midtown. I lost a little respect for the man for a second, but once we got the Mil's and the Mid's straightened out, we could get on track with a serious conversation. 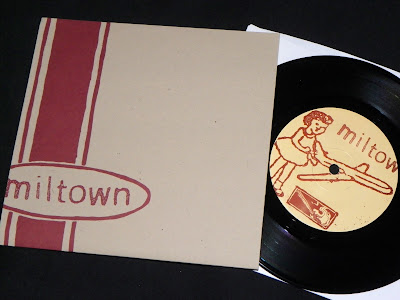 Given my confusion over the two band names, and the fact that I've never cared very much for Hydra Head Records releases, it is no wonder Miltown never crossed my radar. With a '96 mindset, and a youtube link for the band's song No Matter handed to me, I decided to give them a shot.

From that first song, I was hooked. When I visit 1996 in my playlist, this is the exactly what I want to hear. I didn't know anything about Miltown, so I started digging around and taking it every piece of info that could find on the internet. I was reading interviews and watching live youtube videos. I couldn't get enough...and you mean to tell me that the band only released one 7 inch and a split with Cast Iron Hike? Damn. I want more. 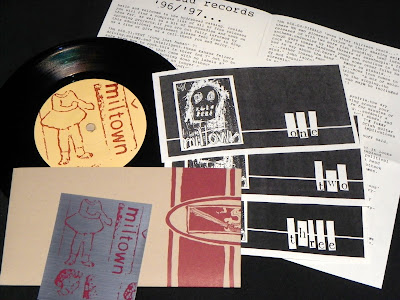 It's funny. Here is a band that was playing in the Massachusetts scene, that I was a part of, and yet somehow I don't hear about them until 20 years later, from a dude in the UK.

Awesome band, awesome singer. Also be sure to check out Only Living Witness and Milligram (if you hadn't make the connection yet). Two other bands featuring Jonah Jenkins on vocals. Here's an interview I did with him some time ago: http://www.swnk.org/interviews/jonah-jenkins/

Aah you already linked to that interview, it's early over here and I can't seem ot edit my previous message :)

Hey Pim! Yeah, I was familiar with OLW, as I saw them a few times back in the early 90's opening for Sam Black Church. Jonah was always a nice guy hanging out to talk with people, and I still have the Complex Man 7 inch that I bought from him. Unfortunately that is really the only OLW record that I have.

This was a fun read. Slightly disappointed you didn't pick up a color vinyl copy of this one though :o)

Trust me. If there was a color vinyl copy available, I would have jumped at it.