I picked up the last two Wo Fat albums based on their amazing artwork alone. Man, those album covers are amazing pieces of art...great examples of record covers done right.

When Wo Fat released their new album, Midnight Cometh, earlier this year, I was a bit underwhelmed by the cover art...and subsequently ignored it. What can I say? I was in more of a punk rock mood, and couldn't be bothered with new releases from some Stoner/Doom band. 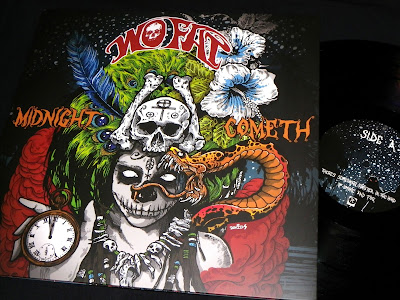 As summer was starting to fade, and the upcoming Saint Vitus/The Skull show was on the horizon, Doom started to creep into my playlists, and I decided to finally get off my ass and download that new Wo Fat album to see if it moved me. Well, holy shit. Surprisingly it knocked me on my ass. Quite possibly my favorite record from the band.

I was tempted to chase a piece of the sold out colored vinyl, but when I found the black vinyl at my local store, I took the easy way out and grabbed it. The only disappointing thing about this record is that the vinyl leaves off my favorite song, Riffborn. Big mistake leaving this killer track off the vinyl. Only five songs in 45 minutes. They should have stretched this out to a double LP just to include it. 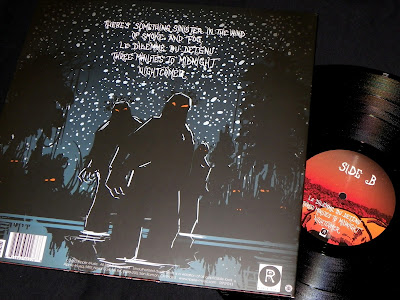 I actually really dig the back cover art, and kind of wish that they used this on the front.