I do love live bootleg LPs. I've got a few of them in my collection, and when I stumble across them on my record shelves, they strike me as something special. Nothing official...fuck, anyone can buy a live album from a band, but it feel like you are part of an elite secret society when you own a live boot...as if record collecting didn't already make you better than everyone else as it is.

Well, a couple months ago, Sandwell was blogging about a few Iron Maiden boots that he'd recently picked up, and it got me itching to pick up one myself. 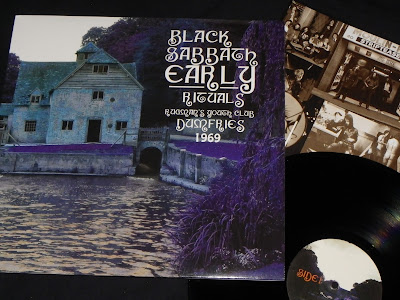 I'd been eyeballing an Iron Maiden bootleg from the Piece Of Mind tour, and had been tempting myself with it for a couple of weeks. It was a bit pricey, and I kept procrastinating on pulling the trigger. When I saw a new bootleg available for Black Sabbath, and at a great price, I finally scratched that itch.

According to the liner notes on this album, the recording was for the band's first show as Black Sabbath, just after they had changed their name from Earth. 1969. Before they had even recorded their first album. This bootleg really reaches back into the archives! 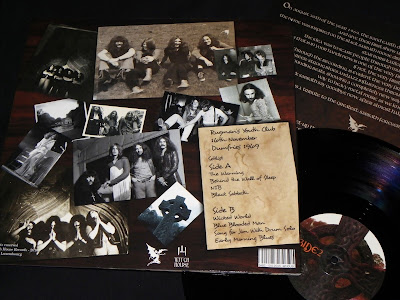 Very cool to hear the band live during those formative years, including three bluesy songs from the setlist that never were recorded for a studio album.

For a bootleg, the packaging on this is great. The history behind the recording, the list of equipment that the band was using that night...plus all the great old pictures. Well done.