Longing For The Skull

It was recently announced that The Skull and Saint Vitus were doing a Fall tour of the US. I was interested in getting tickets, but then as soon as I saw that Magic Circle were opening the Boston show, there was no turning back at that point. I had to go. Even though I've grown to hate driving into the middle of Boston for shows, I'm making an exception in this case. 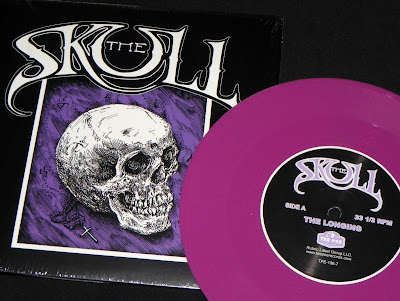 While I was hanging out in the All That Is Heavy webstore a couple weeks ago, I noticed that they were carrying the new 7 inch single from The Skull. Having just purchased my tickets to see them live, it seemed like a good time to pick up the band's latest 7 inch release. 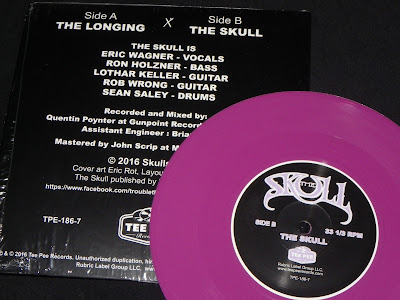 Admittedly, it took me a little while to warm up to The Skull's 2014 album, For Those Which Are Asleep. However, after purchasing my tickets to their show, I had that record spinning daily. Man, that thing finally sunk it's hooks in me and wasn't letting go. This new 7 inch follows suit. One new song, The Longing, plus a new recording of their namesake song that was originally done by Trouble back in '85. Great stuff and it has me fired up even more to see them live.