When you play in the arena of cheap 7 inches, chances are you're one of the few people that still care about relatively unknown and obscure bands. I don't think that Reinforce were causing that many ripples back in the late 90's, but I would imagine that in 2021 there are probably only two guys that get excited about collecting this band. 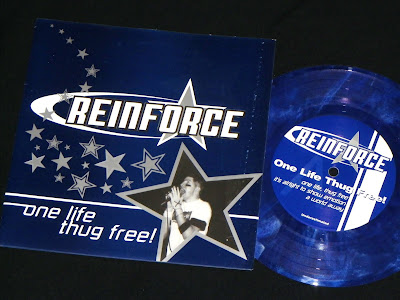 I really liked this second 7 inch from Reinforce back when it was released. I never had any interest in the tough guy bands of the day, and so I was hooked from the start with the One Life Thug Free record title. The band definitely idolized 7 Seconds with everything from the positivity, the sound, and even the eye-black. They seemed to just really have fun playing hardcore, and I bet they were a blast to see live. 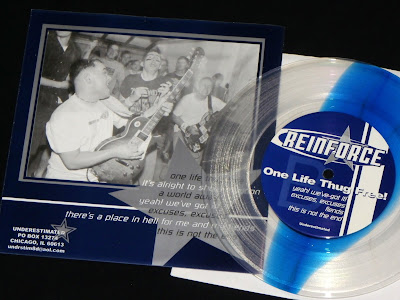 I'd kind of forgotten about the band as they've been buried under twenty years of records since they were around, but picking up these $3 records was a nice reminder. One of the things that had me excited about buying a couple pressings of this old Reinforce 7 inch was how great the colored vinyl looked. That clear vinyl with the blue streak might be one of the best looking pieces of colored vinyl, and the blue marbled is pretty tight as well. 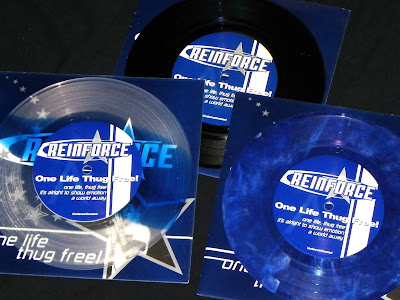 I wasn't a collector back in 1999, and was quite content with my regular black vinyl pressing, but these days I'm stoked on the colored vinyl for this 7 inch. Now if I could just get my hands on the "Melanie Jayne Chisholm" edition!
Posted by Mike at 7:39 PM

Without wanting to spoil your future entertainment, I may also have recently picked up one of these recently too. Which makes me one of the two fools you mention (and yes, I know you didn't say 'fools', but it seems pretty apt in this case).

The Mel C version is honestly one of my favourite covers of all time.

You were always my number two fool.