We Do Not Have A Dinosaur

A while ago, I got it in my head that I wanted to make a run at collecting all the pressings for the Slap Of Reality records. It probably wouldn't be that difficult of a task, as I don't think there is really anything all that rare, but I do love the band when I'm in the mood for that early 90's hardcore vibe. The thought, however, didn't stick for very long as I was soon chasing other things. Still, at the time it was on my mind, I did throw a few things onto my Discogs Wantlist in hopes that something may show up that I could grab for cheap. 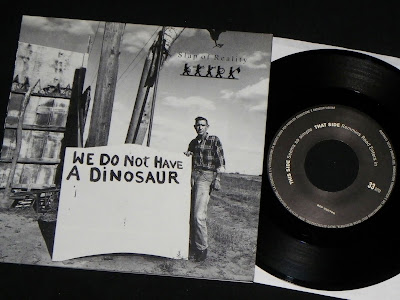 A couple years ago, I managed to pick up the Fletch 7 inch, and since then I haven't been motivated to buy any other Slap Of Reality records. When I was recently picking up some stuff from the Armageddon Shop on Discogs, I noticed that they had a Slap Of Reality record with a great price tag, so I quickly added it to the cart. Damn. It will be good to not have this show up in my Wantlist notification anymore. 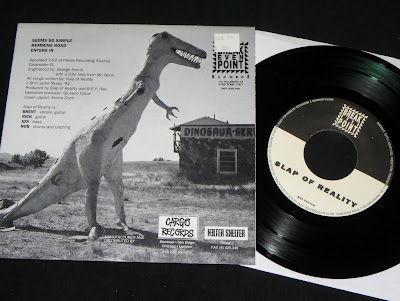 The We Do Not Have A Dinosaur 7 inch was originally released on Break Even Point, which I believe was out of Italy, so it wasn't readily available overseas to me back in 1992...in fact, I don't even know if I was aware of it until a few years ago. Prices have stayed pretty flat on this record, and 25+ years later it can still be picked up for $3. 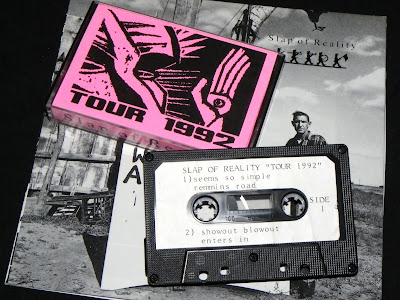 Truth be told, this 7 inch isn't that great, and probably ranks at the bottom of the Slap Of Reality pile. The band were in a weird place at the time, and had a new singer step in before they broke up later that year. The band recorded this Dinosaur 7 inch, plus a tour pressing of a four song cassette (three of those songs ended up on this 7 inch, and the other song was on one of the split Suburban Voice 7 inches that came with an issue of the fanzine). I saw the band in Portland Maine during this tour, and can't remember if we knew the band had a new singer prior to the show, or if we discovered it at the show. Either way, it was fun to see them play even though the crowd at hardcore shows in Portland back then were the worst. Things escalated as some people started throwing things at the band while they played, and the drummer came out from behind the kit and offered to go toe to toe with any of them. Props to the band for not backing down.