A few years back, I was on a big Soulside and Rain Like The Sound Of Trains kick, and I couldn't get enough of those bands. While I was knee deep in those bands, I remembered that I'd seen the singer Bobby Sullivan fronting another band named Seven League Boots in the early 90's opening for Fugazi in Boston. It had been about 20 years since that show, but I'd still never heard anything from the band. Thanks to the power of the internet, I was able to download the band's entire discography about 15 minutes later. 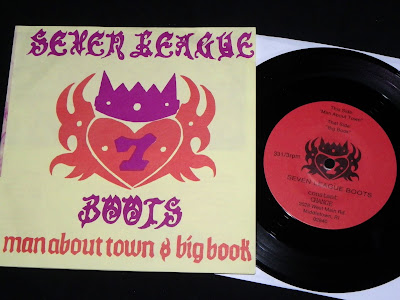 To be honest, those twelve Seven League Boots songs fell far below my expectations, and didn't come anywhere near my love for Soulside or RLTSOT. I'd basically ignored the band since then, but seeing the Man About Town 7 inch in the used bins at Armageddon for $3, I figured that I'd give them another shot. Who knows...maybe a small dose of two songs would sit better than trying to get into the bands entire recorded output. 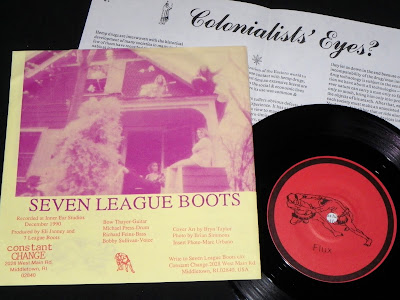 Yeah, I don't know. Man About Town is a pretty good song, but Big Book has a bit of a reggae influence that I'm not interested in. Still, it was a nice cheap addition.