Back when the record collecting blog community was strong, and before everyone fucked off to Instagram, I was following Lins over at Never Ending Game when he introduced me to Citizens Patrol. That was around 2008, and while the band only had a couple 7 inches available at that time, I loved what I was hearing from them. The band absolutely ripped with that fast early 80's hardcore sound. 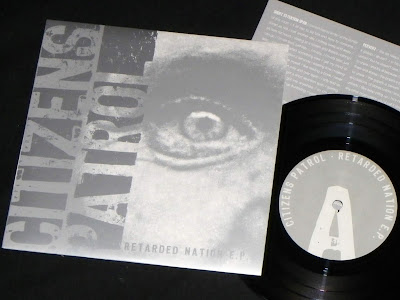 The blog that Lins was doing died off a few years after that, and no one else seemed to be talking about Citizens Patrol, so I had no idea what the band were up to...but when I saw the Retarded Nation 7 inch in the bins at Armageddon, I figured that I'd roll the dice and take a chance on the record.

Oh shit! This record is great! The Retarded Nation EP was released back in 2012, but the band still sounded just like I remembered from their first records in 2007/2008. 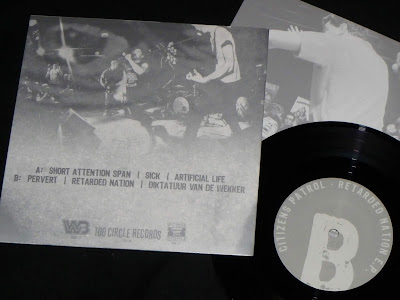 Of course the record that I'd grabbed at Armageddon was just the common pressing, and isn't as exciting as the clear vinyl ones. Still it was very cool to find this and discover something "new" from the band...even if it was originally released 7 or 8 years ago.

Not quite everyone. Just the lazy shites :o)

I have some copies of their first two 7"s for sale, including the record release version of "Dead Children"...

Not looking for big bucks, but I'm in Europe, so shippig might be a bitch.