30 Years Out In the Cold

I'm a big fan of Judas Priest, but I've never really been obsessive about collecting their records. I have most of their albums on vinyl, and that is all that I've really ever focused on for them. However, recently I've really been tossing around the idea of taking my Priest collecting to the next level.

When Doug was recently in Japan, he picked up one of the singles for Priest, and it got me interested to take a look at the band's Discogs page...just to get an idea of what the band had released for singles, and then I suddenly fell in love with the look of all those picture sleeves...especially the Japanese ones. Since then, I can't get them out of my mind, and I really want to go on a spending spree. Money is a bit tight at this moment, so I'm really trying to pump the breaks on this right now, but man, it is a daily struggle not to start spending stupid money on this obsession. To try and keep things in check, I figured that a cheap Priest addition might help things from boiling over. 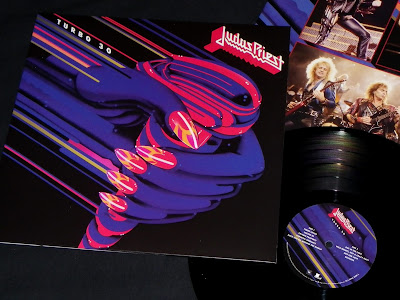 A couple years ago, Judas Priest celebrated the 30th anniversary for their Turbo album. The album was remastered and repackaged, and while the CD release included a bonus disc containing a live set from the Turbo tour, the vinyl release doesn't really offer anything new. When I first saw the Turbo 30 record in the bins at the record store back in 2017, I was tempted to buy it simply because of the alternate album art, but in the end I managed to talk myself out of it. Two years later, with a Priest obsession consuming my thoughts and eBay searches, I knew that I needed the Turbo 30 record in my collection. 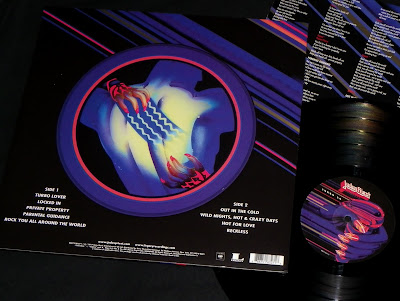 I'm a huge fan of the Turbo album, but it may be one of those records that is a "time and place" thing. I got this album the summer before my 16th birthday, and while there was definitely a bit of a disappointment when I first heard it, it still became the defining album of that summer.

Give me more Judas Priest!