When I was first starting to discover underground punk and hardcore, around '91, I had picked up a copy of No Answers #9 because there was a Judge interview in there that I wanted to check out, and that 'zine opened my eyes to what was going on in the hardcore scene beyond Slapshot, Sick Of It All and Revelation Records. I read those interviews and record reviews over and over again, and was quickly sending some cash in the mail to Kent McClard's distro, curious to check out some of those bands that he was into. One of the first records that I'd ordered was the Cringer 7 inch, Time For A Little Something, and I felt like I'd discovered something special. 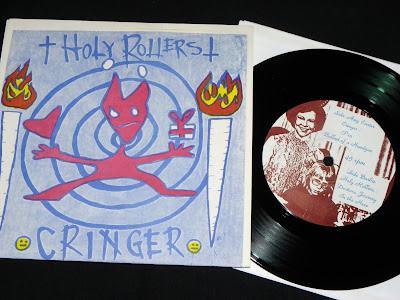 I bought all the 90's Cringer records at the time...their first couple of records from the early 80's didn't have the same impact with me...but it wasn't until much later on that I discovered they also had a couple split 7 inches and appeared on countless compilations. I ended up finding all those songs with the Greatest Hits CD years later, but by that time I wasn't buying vinyl anymore. Feels good to finally grab this split with Holy Rollers. 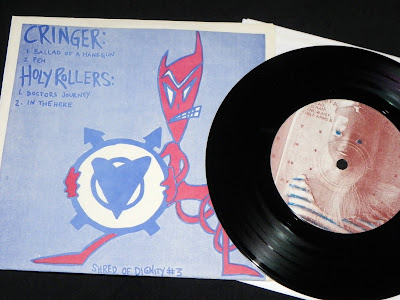 It is funny that all these years later that I'm still not familiar with Holy Rollers. I mean, they were a Dischord band, plus there was an interview with them in No Answers #8, but something along the way turned me off from seriously checking them out. The two songs on this split with Cringer are pretty good. It might be time for me to finally check out one of their albums.

It of course all depends on what you liked "at the time", but I was really into Dischord in the early 90s and Holy Rollers held up nicely amongst the bigger names from the label. If you like Jawbox, Holy Rollers should not be a hard sell. Fabuley is a really nice album full of nice harmonies

Hey Sven! Yeah, I checked out the As Is album recently, and it is pretty good. Definitely something that I'll be listening to again!