Some things can't be explained or rationalized. A band will hit you just right, get their hooks into you, and give you a charge that keeps you returning for repeat listens. They aren't anything extra special...they aren't doing anything new...and when asked why you are losing your shit over them, the best you can do is shrug your shoulders, and exclaim "Because they are awesome!"...or in the case of Amulet, "Because they are fucking Metal!". 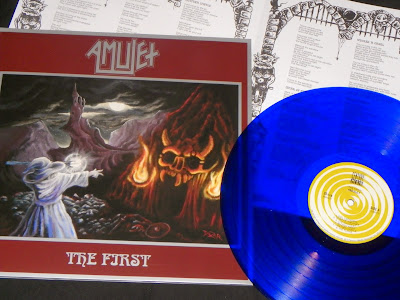 Honestly, I'm not sure exactly why I'm so in love with the new Amulet album, The First. They play strictly by-the-numbers Heavy Metal...just straight forward head banging mania...and I can't get enough of it. For some reason, it reminds me of the first Laaz Rockit album, City's Gonna Burn...maybe not so much with the sound, but just the general delivery of it's proud metal-ness. 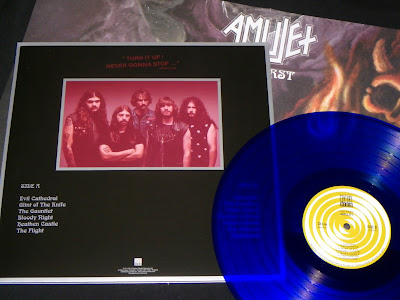 The back cover bears a bit of a resemblance the the back of Metallica's Kill 'Em All.

There have been a lot of great Metal releases this year, and it is going to be tough trying to figure out where this on falls in my Best Of list at the end of the year.