A couple months back, REV added four new pieces of colored vinyl to their distro for the Have Heart demo. The Bottled Up pressing history for the Have Heart is full on ridiculous, and in trying to contain my record spending, the last thing that I needed were four more copies of this thing. While I already had stupid amounts of Have Heart vinyl, I had lost all desire to try and keep up any longer. Fuck it. I quit this stupid game. 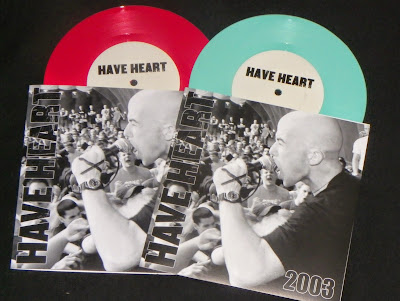 That was my line of thinking when I ignored the new pressings available over at REVHQ. A few months later, Rune over at Droid Rage posted up an article on record collecting. Marcus and Lins participated in the interview, and since I've known those dudes for a while, I figured that I'd check it out. As I read through it, and saw the photos capturing the idiocy of everyone's collections, it ignited that old spark of doing stupid shit and having fun. Did I need more Have Heart records? No. Did I want more, and increase how dumb I could get with my collection? Oh hell yes.

By the time I'd returned to the REV store, two of the four new pressings were sold out, so I grabbed what was available. 150 pressed on mint green, and 200 pressed on red vinyl. 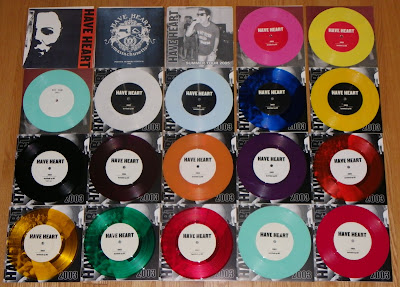 It was stupid how excited I was to receive these two 7 inches. It was a complete waste of money, and I had much better things to buy...but I don't know if anything else would have put a smile on my face the same way that taking this group picture did. 20 copies of the Have Heart 2003 demo, and I have still barely scratched the surface.

Labels: Bottled Up Records, Have Heart

I don't like that I am somehow responsible for this behaviour.

Just to make you feel better, there were only three available from Rev so you have 66% of the available 1st press, not 50%. Of course there are an additional four short press versions that you will never get from the 8th press. Isn't this fun?

dang, that is one great group picture