Fire Up The Chainsaw

As the late 80's came to a close, Death Metal was becoming more and more popular in the scene. Obituary and Deicide seemed to help push things to another level of extreme in Metal, and I just wasn't getting it. I tried to hang with it, but I just didn't get the attraction. Hardcore was really starting to make some noise for me at the time, and I took that as my queue to exit the Metal scene. 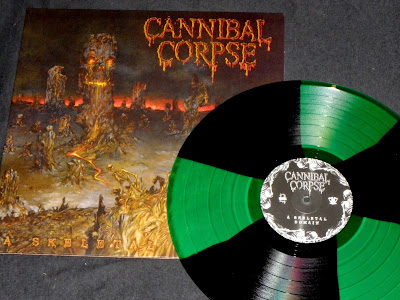 Despite how I felt about Death Metal, when I was looking for something new last year...something that was ugly, violent, and utterly over the top...I decide to give the newest Cannibal Corpse album, Torture, a shot. While it wasn't something I didn't think that I'd be reaching for very often, it certainly fit what I was looking for at the moment.

When the band released their new album, A Skeletal Domain, a couple months ago, I didn't really give it much thought. At some point, something enticed me to check out the band's video for Kill Or Become...perhaps it was the promise of zombies, chainsaws and gore...whatever the reason was, I'm glad I did, because I was immediately hooked. 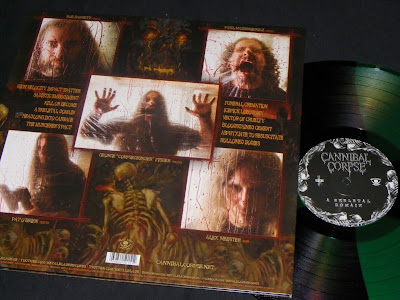 So while I generally don't really like this style of Metal, for some reason Cannibal Corpse does it for me. I hit play, and my eyes roll back in my head, my fingers immediately go to devil horn formation, and I bang my head, wishing that I had long straight hair that I could thrash around. When I found that I couldn't get enough of A Skeletal Domain, and that I kept spinning it daily in my iPod, I knew it was time to get the vinyl. The only problem was that it seemed the only vinyl option in the US was a shitty looking picture disk. No thanks, I'll pass. Thankfully, the Nuclear Blast webstore offered an import vinyl option, and I quickly snatched it up. 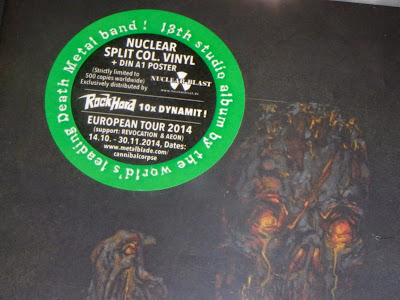 500 pressed on this sweet looking green and black colored vinyl that matches the Nuclear Blast logo.