Rune over at Just Another Day Records has done a great job resurrecting the label. First he brings the long lost Resolve 7 inch back from the dead, and now he follows it up with a brand new release from Perfect People. 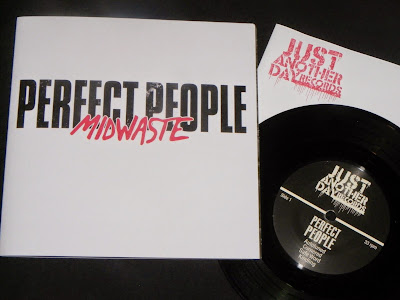 I'd never heard of the band Perfect People, but as soon as I saw Rune's tribute to The First Step with the preorder cover, I knew that I needed to check them out. TFS are one of my favorites, so if you are going to come at me with this cover, you've immediately got my attention. Great choice, and well executed. 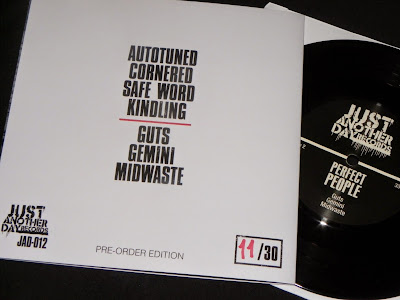 Preorder cover was limited to 30. 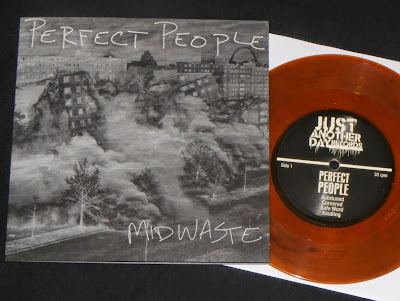 I've been a little slow to gravitate to many Hardcore releases this year, but like the Protester 7 inch, this one is an immediate kick in the nuts. I love this record, and after only a couple of listens, I can tell that it is going to quickly climb my Best of 2014 list.

As I was listening to this, the singer's voice was so familiar, it was driving me crazy trying to place it. I was sure that he had sung in another band that I'd listened to. I checked in with Rune, but wasn't familiar with any of the bands that he was listing. Then it hit me...Ruiner...the singer sounds just like the guy from Ruiner. 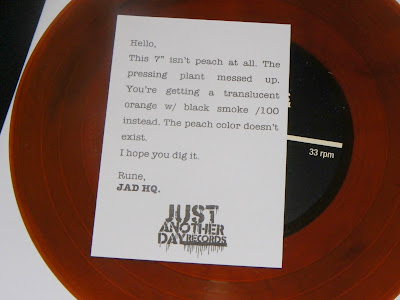 The original plan was for Just Another Day to have 100 pressed on a peach colored vinyl. According to the note from Rune, the plant had some problems mixing the color, so we ended up with an orange/black smoke color. Truth be told, I think this color probably looks better, and compliments the cover art nicely. Great mistake.

Looks great! I tried to order this a few times but the store gave me problems every time, and in the end I gave up.

mcs, send me an email: sundaysunday@deadformat.net. we'll work it out.