Ahhh...early 90's drama. You know that if something was going down, a line in the Politically Correct sand had been crossed. Point Blank released their first 7 inch with an ugly song about those on welfare, called We Don't Owe You Shit. Maximum Rock N Roll was doing a distro at the time called Blacklist, and did not approve of lyrics, so they refused to carry the record. Point Blank responded with their second 7 inch...Blacklisted - We Won't Be Silenced! 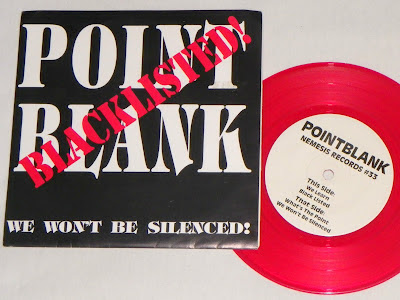 Man, I love that Blacklisted 7 inch. It fits in nicely with the Chorus of Disapproval LP that Nemesis also released that year. I've owned the black vinyl since it's release, but when I stumbled upon the red colored vinyl I knew that I needed to own it. Seriously, at $1.99, how could I refuse? 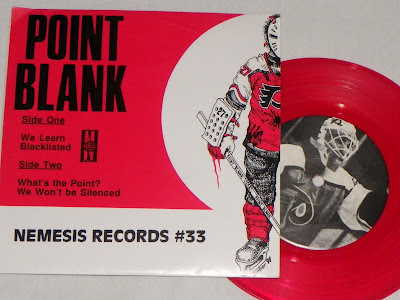 The only thing disappointing about this record is that it doesn't have the lyric sheet insert.

I just picked up both Point Blank 7"s on eBay for super cheap and I'm pretty sure they both have the inserts. If you need a high res scan I'm happy to help.

Oh shit, I just seen a test press of that Gypsy record that you love on Ebay...

I saw that Gypsy test. We are trying to keep it on the down low so that no one else sees it and bids. ha ha ha.

Thanks for the offer on the insert. I've got one from the black pressing that I have.