Kreator have been releasing a string of great albums since they went back to the old school thrash sound with their 2001 release of Violent Revolution. Add that one in with Enemy Of God and Hordes of Chaos, and I was looking forward to their new album this year. 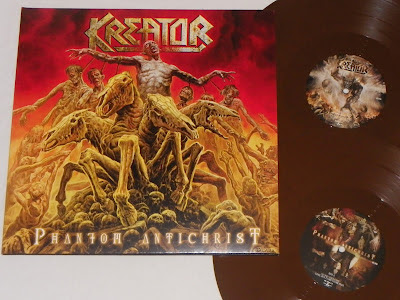 When the album artwork for Phantom Antichrist was released, my anticipation grew. When Kreator posted the title track, to give the fans a taste of what was to come...holy shit...I couldn't wait. 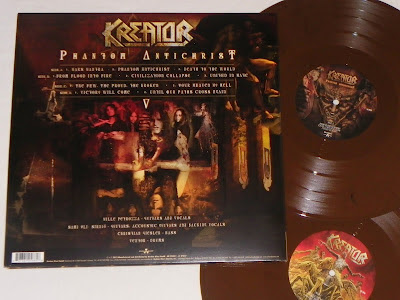 The album arrives and it storms out of the gate...Phantom Antichrist, and Death to the World are killer songs...but then something funny happens...throughout most of the rest of the album, I can hear elements of Power Metal sneaking their way into Kreator's brand of German Thrash. It sounds out of place and awkward. I just want the band to blaze through this album and destroy everything in it's path...instead we get some "uplifting" and "epic" sections. The album has grown on me a little bit over the past couple of weeks, but I would still rather have my old Kreator back. 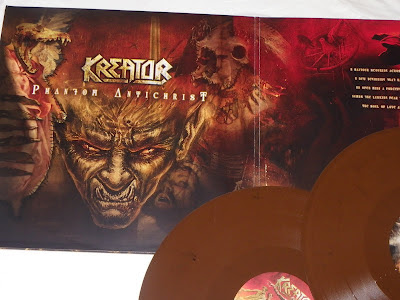 300 pressed on brown vinyl, and available exclusively through Nuclear Blast.

Kreator - I have a real soft spot for that band just because when ever I see the name it always reminds me of a kid I knew when I was first getting in to hard music who LOVED Kreator. He pushed the Coma Of Souls album on to me and I never really liked it that much but his enthusiasm for the band was certainly infectious. Nothing to do with your post but there ya go.

I know this is not nearly as interesting/funny if you don't speak German, but I'll point you this way anyway. This is a documentary from 1989/90 about a certain venue (Zeche Carl) with Kreator as a focal point (kind of like the resident house band). Altenessen is "suburb" of Essen in the industrial region in which I grew up (has a very similar history to Pittsburgh; lots of coal mining and steel industry)
Enjoy.