Last year, I picked up the new album from Crusades. I loved it, and it quickly became one of my favorite surprises of the year. Their mix of punk rock and melody kind of reminded me of a band from the early 90's called Sticks and Stones. I hadn't thought of them for years, so I dug out my copies of The Optimist Club and Theme Song For Nothing. For being almost 20 years old, those albums held up really well, and it got me looking into what else the band had released. I checked the internet high and low, but kept coming up empty handed in my search for free downloads. I couldn't find anything.

I don't typically blind buy records. I like to check them out first to see if it is worth my purchase. I wasn't going to have any such luck if I wanted to hear more Sticks and Stones. 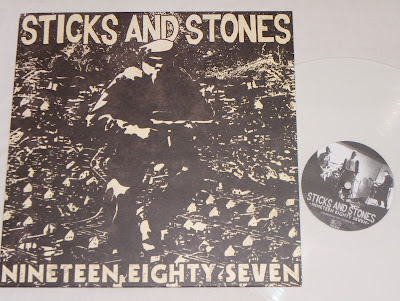 I had built up a pretty decent credit at Interpunk, and it was burning a hole in my pocket. When I saw that they had the Nineteen Eighty Seven EP in stock, I took a chance and grabbed a copy. This is the bands first recordings from 1987 (obviously), and while they had a different singer at the time, and it is more raw than their LPs from '93 and '94, I'm still loving these songs. 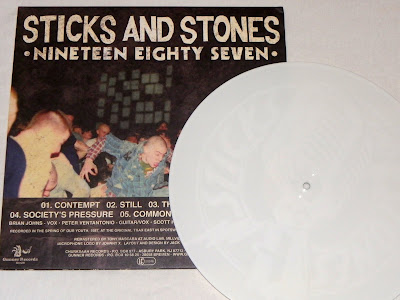 The B-side of this record is etched with the Sticks and Stones microphone logo. It was difficult to get it to show up in a photo, but it is there.