Yeah, I've been on a bit of an early 90's kick lately. Actually it's a vicious cycle. I'll been in the mood for early 90s Hardcore, and I'll spend a week or so listening to nothing but that time period. Eye For An Eye, Kingpin, Junction, Endpoint, Blindfold...they all get some serious playing time on my iPod, and then I'll find myself searching, and buying a bunch of vinyl on eBay. The mood will cool off, and I'll move on to something else...probably listening to that Fire & Ice or Gypsy record that I can't stop spinning. Anyway, a month or so later, I'll start blogging about those records that I bought, and it will put me back in an early 90's frame of mind. The cycle starts over and those are the only bands I'll be listening to, and then I start searching eBay again. 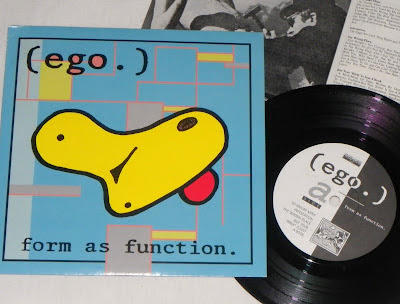 With my last early 90's kick, I found myself searching through some old 7 inches...looking for some records that I don't have loaded up to my iPod. One of those records that I dug up was the Es Kommt Von Selbst 7 inch from the band (ego.). (ego.) was the band that Mike Bullshit formed after Go! split up, and they pick up right where his last band left off. It's funny that as much as I liked the Es Kommt 7 inch back in the early 90's, I still never managed to pick up their first record until now. 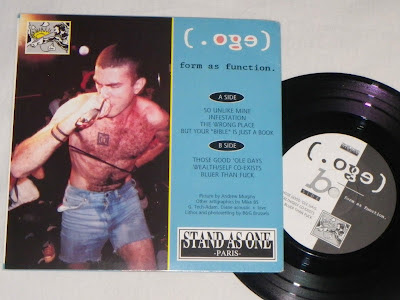 Today, you can find any new vinyl release with a quick internet search, but back in '92/'93 we were restricted to what the distros carried. I'd get the Ebullition, Lumberjack, and Very (R.I.P. John Dudeck) catalogs, and if the record wasn't listed in there, I couldn't get it. Maybe it was because both (ego.) records were pressed overseas, but I never had the opportunity to pick up the Form As Function 7 inch. Thanks to today's power of the internet, I was able to finally buy and listen to this record that had eluded me for 20 years...and the best part is that (ego.) have held up over the test of time. Great record, and a deal with the 99 cent pricetag.

Bluer than fuck!
Man, even "back in the day" I spent more than 99cents on this ;)